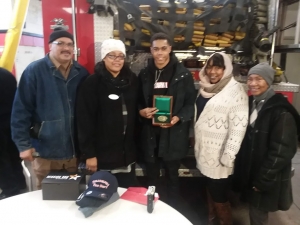 “It’s a special thing that this young man did. He went into service when he didn’t have to. It’s a beautiful thing, and we’re here to celebrate and honor that today,” said Paul Grevy, captain of Philadelphia Fire Engine Company 54.

Pictured with Edwards are, from left, his parents, Brent Edwards and Rachel Noel; his aunt, Andrea Noel; and family friend Vicki Leach. In May 2017, 17-year-old Rudy re-entered his burning home to find his toddler nephew and bring him to safety.

“I did it basically because that’s my nephew. I want to see him grow up and do something good in life,” Edwards said after the ceremony.