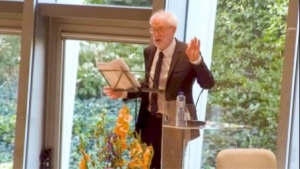 The Carnegie PeaceBuilding Conversations, a three-day program presented by Carnegie institutions worldwide and their partners, was held Sept. 24, 2018, at the Peace Palace in The Hague. Among the event’s roster of speakers, Carnegie biographer David Nasaw examined Carnegie’s efforts to build worldwide peace. Here are excerpts from his remarks:

We are here today because of a funny-looking little Scotsman, who, in his high-heeled boots stood no more than 5 feet tall, a strange-looking gnome of a man who resembled Santa Claus in a top hat or a miniaturized Karl Marx.

Andrew Carnegie knew that the laws of evolutionary progress guide change over time, that history has both purpose and direction, that the world was getting more prosperous, more civilized, [and] more humane. The age of barbarism had been marked by savagery, the inability of men to settle disputes other than through violence, the organized killing of innocent men by innocent men. The age of civilization would, on the contrary, be marked by the replacement of violence with reason in the settling of domestic, personal, and international disputes.

“You will find the world much better than your forefathers did,” Carnegie declared in his second rectorial address to the students of St. Andrews, delivered just five years into the new century. “There is profound satisfaction in this, that all grows better; but … There still remains the foulest blot that has ever disgraced the earth, the killing of civilized men by men like wild beasts as a permissible mode of settling international disputes.”

Carnegie was not alone in campaigning for peace. The first half of the 19th century, in the U.S. and Britain and on the continent, witnessed the proliferation of local, regional, and national peace and arbitration societies, congresses, and campaigns. Peace, disarmament, and arbitration activists had come to believe that their cause was achievable.

The scaffolding for a new, civilized world order was already in place — here, at The Hague, where a Permanent Court of Arbitration had been established at the international conference in 1899, called by Czar Nicholas II, and attended by the representatives of 27 nations.

To celebrate the dawn of this new era, Carnegie, in April 1903, committed $1.5 million (about $43 million today) for the erection of a Peace Palace to house the Permanent Court of Arbitration and a library. Mankind was now set on the path to peace — and progress along it appeared inexorable.

In October 1904, U.S. Secretary of State Hay issued a call for a second peace conference at The Hague.

In June 1905 Japan and Russia ceased hostilities and agreed to negotiate peace terms, with President Teddy Roosevelt as arbitrator, in Portsmouth, N.H.

Carnegie, buoyed by events, stepped up his personal and now full-time campaign for peace. In October 1905, in his second rectorial address at St. Andrews, he delivered an overly long treatise on the history of peace activism, on the folly, the madness, the immorality, the inhumanity of war, and the need to eliminate it from the face of the earth through “Peaceful Arbitration.”

“Most of the monuments in the world,” Carnegie had discovered, to his dismay, were “to somebody who has killed a lot of his fellowmen.” That was not heroism. His Hero Fund would call attention to, recognize, and reward the true heroes of the world.

With every utterance, Carnegie made new enemies and enflamed old ones. Carnegie was undeterred by the criticisms, by the caricatures, by the insults to his manhood. What worried him was that, while mankind appeared to be progressing toward peace, there were fearful signs of war on the horizon. Though Carnegie Steel was making a fortune outfitting new battleships with steel armor, Carnegie insisted that armor was for defensive, not offensive, purposes. And, to his partners’ dismay, he campaigned for an end to this arms race.

The second Hague conference saw little accomplished on naval disarmament, compulsory arbitration, a League of Peace, or the organization of an international police force, which neither deterred nor discouraged Carnegie. More nations had participated in 1907 than in 1899 and the conference had adjourned with a resolution to meet again, though no date was set for a third conference.

Despite the failures of the second Hague conference, Carnegie remained confident that his peace-building goals would come to pass, but perhaps not just yet. Carnegie would succeed where the second Hague conference had failed, through the power of personal diplomacy. He had already established connections with the leaders of the U.S. and the U.K., and lesser but still friendly personal relationships with the leaders of France and Italy. He had failed, however, to make any headway with Kaiser Wilhelm II of Germany. But he did not despair. He would enlist as his surrogate peacemaker a man who would have no trouble gaining an audience with and sitting down with the kaiser. Theodore Roosevelt would be his representative.

In April 1910 Roosevelt arrived in Europe and was greeted like a conquering hero in Paris, then in Belgium, the Netherlands, Denmark, and Norway. Carnegie’s plan was that Roosevelt meet with Kaiser Wilhelm II in Berlin. But Roosevelt had no intention of doing his bidding.

Carnegie’s plans had fallen flat, but he did not give up hope. Instead he shifted his focus from Europe to Washington, where he intended, under the leadership of President William Howard Taft, to secure passage of a meaningful, near-compulsory, bilateral treaty of arbitration between the U.S. and Britain, after which similar treaties would be negotiated with France, Germany, Russia, Italy, and Japan, culminating in the creation of a functioning League of Peace.

To help Taft get his proposal through the Senate, Carnegie organized and donated $10 million dollars to establish his “peace trust,” the Carnegie Endowment for International Peace.

Taft’s treaties ran into trouble almost immediately. Teddy Roosevelt declared that the nation that pledged to arbitrate its differences would end up dishonored and impotent. To fight back, Carnegie took $10,000 of his own money to pay for clergymen to travel to Washington and lobby their senators. Again, his efforts came up short and Taft’s arbitration treaty bill was eviscerated by amendments.

Carnegie failed to recognize the frightening insularity of America’s leaders. He had never paid much attention to public opinion, believing that he had the money and the skill to educate the public. It was a terrible mistake to build peace from the top down without simultaneously working from the bottom up. There was work to be done — then and now — in the United States. He did not do it, but we must.

The Hague conference had failed, Roosevelt’s mission for peace had ended in failure, and Congress destroyed Taft’s treaties of arbitrations. The arms race in Europe continued.

And still, the “Star-Spangled Scotsman,” as he proudly called himself, refused to give up. In February 1914, Carnegie endowed a second agency, the Church Peace Union (known today as the Carnegie Council for Ethics in International Affairs) with $2 million, with the understanding that it would take a more political role than the Endowment could.

And then, the unthinkable. The spark Carnegie had spent the last 20 years trying to extinguish took flame, and the nations of Europe resorted to violence to settle a local dispute between Austria and Serbia. He went to Washington, where he implored President Woodrow Wilson and the American government to do what it could to broker some sort of peace agreement. He failed, the war ground on, the killing accelerated.

Carnegie celebrated his 79th birthday in November 1914. In December he predicted that if a League of Peace were not established at the end of the war now raging, the vanquished would rise up again to renew the cycle of bloodshed.

In March 1915 he was asked in an interview with the New York Times if he had “lost faith in the peace impulse which centers at The Hague.”

“Certainly not. I verily believe that in this war exists the most impressive, perhaps the only argument which could induce humanity to abate forever the curse of military preparation and the inevitably resultant woe of conflict … This war staggers the imagination … I do not underestimate its horror, but I hope, and I believe that this very horrible, newly barbaric excess will so revolt human nature against all things of the kind that the reaction will be great enough to carry us into the realms of reason. And the realms of reason are the realms of peace.”

This was to be his last interview. He retreated into silence, stopped writing, seeing visitors, speaking, corresponding; he refused to read the newspapers. His friends were distraught, as, of course, was Louise, his wife, who did not recognize the once voluble, active, little man who could not stop talking. They were convinced he had suffered some sort of a nervous breakdown, brought about by his failure to do anything to stop the Great War. The supreme optimist had in the end been defeated by the reality of man’s inhumanity to man. And had ceased to communicate with the world around him.

On Nov. 10, 1918, the day before the armistice was signed ending World War I, he took up pen again to write a last letter to Woodrow Wilson. “Now that the world war seems practically at an end I cannot refrain from sending you my heartfelt congratulations upon the great share you have had in bringing about its successful conclusion. The Palace of Peace at the Hague would, I think, be the fitting place for dispassionate discussion regarding the destiny of the conquered nations, and I hope your influence may be exerted in that direction.”

We are here today because Andrew Carnegie remains with us in spirit. He was a man of the 19th century who hoped for better in the 20th century. We are now nearly two decades into the 21st. Let us pause — at this moment, in this grand Palace of Peace, and look back across the desolate dark century that has passed, the world wars, the genocides, the killing fields. Without forgetting the horrors of our recent past and the dismal failures to build a lasting peace, let us remember, celebrate, and build upon this little man’s dreams. Let us renew, with him, our commitment to work towards a future when reason and humankind take the final step forward on the path from barbarism to civilization.