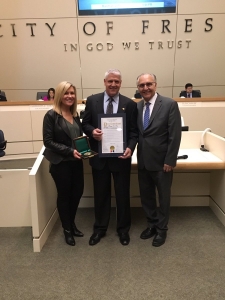 Carnegie Hero Cregg Jerri, center, holds an official Fresno, Calif., document proclaiming March 21 as the city’s Cregg Jerri Day. His wife, Teri Jerri, left, and Fresno Mayor Lee Brand, right, stand beside him. Brand presented Jerri with the Carnegie Medal at a March 21, 2019, Fresno City Council meeting. Jerri was a customer at a Fresno coffeehouse on July 20, 2017, when a masked man armed with a hunting knife and a replica handgun demanded money from a barista. As Brand put it, Jerri “stood up for justice.” Jerri struck the assailant with a chair, leading to a violent struggle in which the assailant stabbed Jerri in the neck. Jerri seized the knife from the assailant and stabbed him several times before they separated. The assailant fled, but police caught him soon after. “I’m glad there are heroes like Cregg who aren’t afraid and do the right thing,” Brand said. Jerri credited his wife and family for helping him handle the aftermath of the incident. “I did what I thought was the right thing to do,” he said.