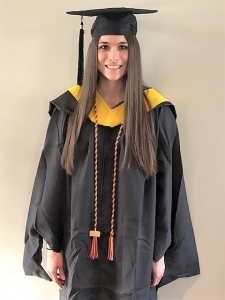 In the Hero Fund’s Deed of Trust, Andrew Carnegie declared, “For exceptional children exceptional grants may be made for exceptional education.” The members of the Commission are delighted to support recipients of the Carnegie Medal and qualifying dependents in their academic endeavors.

After a person is awarded the Carnegie Medal for risking their life to an extraordinary degree to save the life of another, the supportive presence of the Fund remains, including in the form of scholarship aid.

In an effort to highlight the successes of Carnegie heroes and their dependents, imPULSE will feature profiles on graduating scholarship recipients, beginning with Carnegie Hero Jenna Fanelli, who will graduate from The State University of New York Downstate Medical Center in spring 2019.

In 2015, Fanelli was awarded the Carnegie Medal for helping save a 5-year-old boy from drowning in Yonkers, N.Y. She swam to the boy, wrapped her arm around his chest, and used her free arm to swim toward the bank against a swift tidal current that carried them farther up the river. Others helped in getting the uninjured boy out of the water. Fanelli was nearly exhausted and sustained some cuts to her feet, but she recovered. A man who also entered the water to save the boy died during his rescue attempt.

In May 2019, Fanelli will graduate with her master’s degree in occupational therapy. She will have achieved a 3.8 grade point average and maintained her spot on the dean’s list every semester.

“The support the organization has provided has given me the opportunity to focus on school and excel in my program. It has removed the stress of financial struggle from my plate, which has been a blessing I will acknowledge for years to come,” Fanelli wrote in an email to the Commission.

Deemed her proudest accomplishment, Fanelli was admitted to the highly competitive Specialization in Early Intervention program, which focuses on promoting and supporting the development of children, from infancy to age 3.

“This [experience] is so meaningful to me because I wholeheartedly believe that all children should have ample opportunities to live a productive and fulfilling life,” she said.

During the past two and a half years she has busied herself with research projects, community work, and extracurricular activities. Fanelli helped run information sessions for future students interested in studying occupational therapy at The State University of New York Downstate Medical Center. During these sessions Fanelli said she advocates for the program, guiding potential students through the requirements and answering questions about the field.

“Providing applicants with a personal perspective about the program and the profession can have a genuine impact on the paths they chose to pursue,” she said.

Her master’s project focused on providing education on early intervention in various professional fields, which is currently lacking in New York City, she said.

Using Blackboard software, participants completed five sessions of an online module, as well as surveys before and after the experience.

In the community, Fanelli teaches life skills to patients at Clementine, a residential eating-disorder treatment center located in Briarcliff Manor, N.Y. She and a fellow student run weekly groups to help patients develop skills such as communication, positive use of social media, relationship building, personal hygiene, transitioning to college, and time management.

“After speaking with staff and clients at Clementine, life skills were identified to be the greatest area of need and therefore became the primary focus of my project,” Fanelli said.

On the weekends, Fanelli works as a caregiver for an adult with autism and during the summer she teaches swim lessons to children. Both roles, she said, have given her invaluable experience she will rely on as an occupational therapist.

Fanelli’s future goal is to work in the area of early intervention.

“As an occupational therapist working in early intervention, I will have the power to educate and support families of children with developmental, social, emotional, intellectual or physical delays and empower them to overcome challenges they may be facing,” she said.