Pittsburgh steelmaker Andrew Carnegie realized the importance of recognizing heroes decades before the disaster that served as the impetus for the creation of the Hero Fund.

The first hero he privately recognized was teen William Hunter, who died while attempting to rescue a boy in Scotland, but other men and women were also private benefactors of Carnegie’s drive to bring to light the good deeds of those acting on behalf of their fellow man.

In 1904, a coal mine disaster in the suburbs of his beloved Pittsburgh pushed Carnegie to formalize heroic recognition with the Carnegie Hero Fund Commission.

"I do not expect to stimulate or create heroism by this fund, knowing well that heroic action is impulsive; but I do believe that, if the hero is injured in his bold attempt to serve or save his fellows, he and those dependent upon him should not suffer pecuniarily."

When news of the explosion in Harwick, 12 miles north of Pittsburgh along the Allegheny River, reached Carnegie, then living in New York, he was deeply touched. “I can’t get the women and children of the disaster out of my mind,” he wrote, duplicating $40,000 in public donations for relief efforts. Carnegie then instructed the local relief committee to have prepared, at his expense, two gold medals “in commemoration of the acts of heroism displayed by Mr. Selwyn M. Taylor and Mr. Daniel Lyle, wherein they sacrificed their lives in an endeavor to save their fellowman.”

Neither Taylor nor Lyle was on site when the Allegheny Coal Company’s Harwick Mine exploded at 8:15 a.m. on that bitter-cold Monday. According to the report of the state’s Department of Mines to Gov. Samuel Pennypacker, a company-appointed commission concluded that the explosion was caused “primarily by a blown-out shot, which ignited a small quantity of gas in the entry. The concussion resulting from this ignition…raised the dust in the entry which, igniting in turn, and with the constant addition of dust, caused the complete explosion of the entire mine.”

“The entire population of the village was in an uproar,” the report continued, “and the utmost excitement prevailed. The explosion had been one of terrific force. The tipple, which was built of iron, was wrecked, the cages were blown out of the shaft, and a mule that had been at the bottom of the shaft was caught by the force of the explosion and blown out and over the tipple, a distance of about 300 feet. The accident had destroyed the organization that existed among the officials, as the mine foreman and the fire boss as well as almost all the employees had been killed. The officials who were present and had escaped the disaster seemed to be dazed and without confidence in themselves.”

The report’s toll of the explosion’s victims: 121 identified by name, 56 unidentified, and two killed outside the mine. The youngest victim was only 15. The count would not be final, as attempted rescue of any survivors proved deadly. 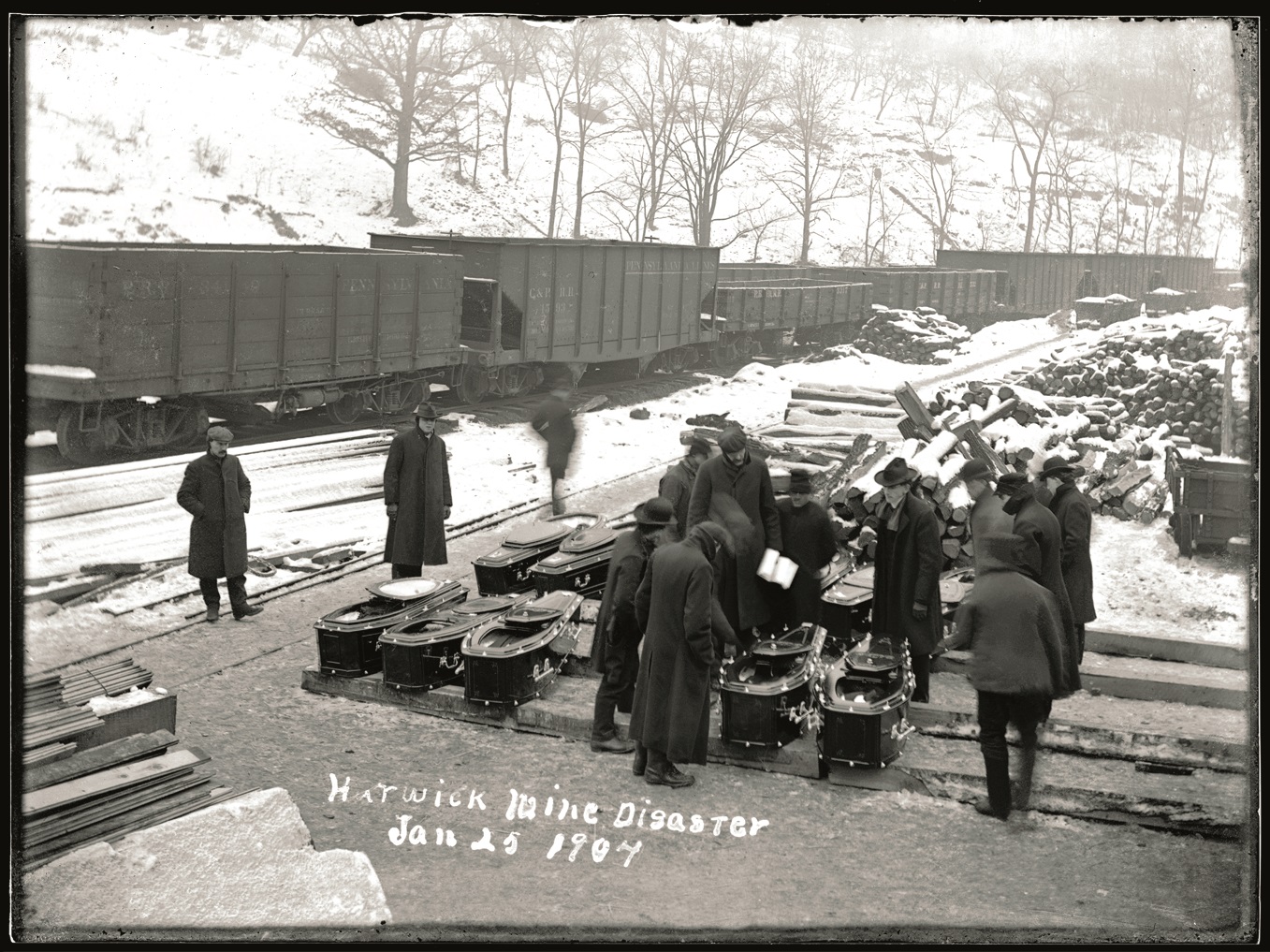 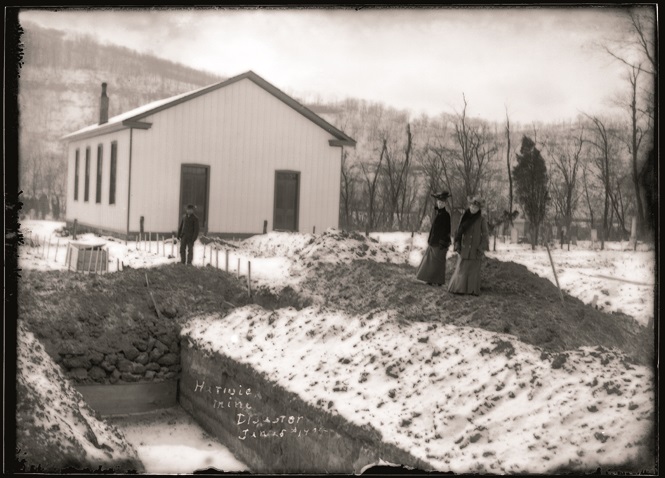 The Heroes of Harwick 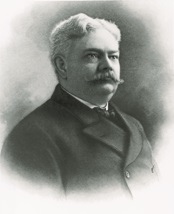 Selwyn M. Taylor, 42, of Pittsburgh, an eminent mining engineer, responded to Harwick within hours. After arranging for repair of a ventilation fan, he and a rescue party descended the main shaft at 6 p.m. They found one man alive at the bottom of the shaft. Adolph Gunia, 17, severely burned, was the disaster’s sole survivor. Believing that others might be alive, Taylor advanced farther into the mine but was overcome by “afterdamp,” an asphyxiating gas, the byproduct of the explosion. He died early the next day, leaving a widow and stepson. 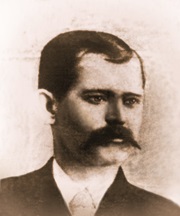 Coalminer Daniel A. Lyle, 43, of Castle Shannon, PA, was staying near Leechburg, PA, when he answered an appeal for rescue workers, responding to the mine the day after the explosion. From the Pittsburg Press of January 27, 1904: “(Lyle) worked yesterday afternoon and most of the night in the mine with the rescue party…he went into the mine before daybreak this morning and started to prepare the bodies to be brought up on the cage. While out in the mine farther than the others of the party, in search for more (miners), Lyle was overcome with afterdamp…The accident cast a decided gloom upon the rescuing party.” Of the reports Carnegie received on the tragedy, perhaps the one concerning Lyle’s death was the most poignant. “Lyle made a valiant effort to rescue entombed men. He left a widow and five children. What a tragedy that his life had to go with his deed! He was a hero.”

Within three months of the disaster, Carnegie had set aside $5 million under the care of a 21-member commission to recognize and support “civilization’s heroes.”

Carnegie took great satisfaction in the establishment of the Hero Fund. Carnegie biographer Joseph Frazier Wall (Andrew Carnegie, Oxford University Press, New York), writes, “Every other philanthropic fund that Carnegie had ever established had been proposed to him — often forced upon him — by others. The Hero Fund came out of his own head and heart, and it delighted him.”

The Carnegie Hero Fund Commission carries out the founder’s wishes by awarding the Carnegie Medal throughout the United States and Canada.

During its existence, the Fund has awarded more than 10,000 medals and about $40 million in accompanying grants, including scholarship aid and continuing assistance. Eight hero funds established in Europe carry out a similar mission. The Carnegie Hero Fund Trust for Great Britain was set up in 1908 and was followed a year later by the Foundation Carnegie in France. In quick succession came hero funds in Germany, Norway, Switzerland, the Netherlands, Sweden, Denmark, Belgium, and Italy. 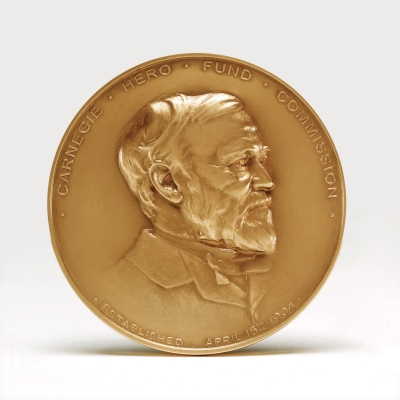 What is a Hero?

The Commission’s definition of a hero has been largely unchanged since 1904: A civilian who knowingly risks death or serious physical injury to an extraordinary degree while saving or attempting to save the life of another person. The cases submitted for consideration–in excess of 89,000 to date–are scrutinized by a full-time staff before formal review by the Commission itself. Persons selected for recognition receive a bronze medal and a financial grant, and each becomes eligible for scholarship aid. Those disabled in their heroic acts or the dependents of those killed are eligible for additional benefits, including ongoing aid to meet living expenses.

Approximately 20 percent of the awards are made posthumously, reflecting a verse from the New Testament embossed on each medal: “Greater love hath no man than this, that a man lay down his life for his friends” (John 15:13).

We live in a heroic age. Not seldom are we thrilled by deeds of heroism where men or women are injured or lose their lives in attempting to preserve or rescue their fellows; such the heroes of civilization. The heroes of barbarism maimed or killed theirs.