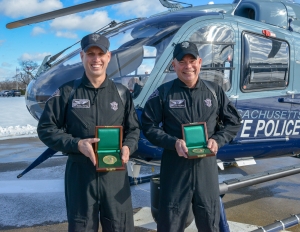 Carnegie heroes Russell D. Phippen, left, and John Hazelrigg pose for a photograph outside their Massachusetts State Police helicopter used in the rescue of a 24-year-old man clinging to a rock in the frigid Merrimack River in January 2018.

In a helicopter not designed or equipped for rescues, Russell D. Phippen, 43, of North Billeria, Mass., and John Hazelrigg, 52, of Lunenburg, Mass., were dispatched to illuminate the scene from above. When ground and water rescues failed, the helicopter team descended to the water level. Phippen, attached to the helicopter by a strap at an open door, positioned himself outside the cabin on a skid.

With the helicopter skimming the water, Phippen grasped the man’s arm and pulled his upper body into the cabin. Unable to pull his entire body inside, Phippen held to him, and Hazelrigg flew to a nearby hospital.

In February 2018 the man Hazelrigg and Phippen saved met them at the state police Air Wing base and thanked the troopers for saving his life.