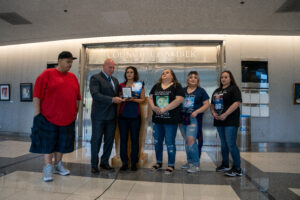 On June 9, 2020, Arthur R. Caballero, Sr., drowned after saving a girl struggling in the Kings River in Sanger, California. After being caught in a swift current, the 7-year-old girl was dragged away from her family. Fishing from the river bank nearby, Caballero, a 62-year-old painter, entered the cold water fully clothed and swam to the girl, grasping her and thrusting her back toward the riverbank where others helped her to safety. The current pulled Caballero downstream and out of sight. Almost an hour later, responding authorities located Caballero, unresponsive. He had drowned.

“No amount of medals or recognition can bring Arthur back – but, we, at the City of Fresno and our friends at the Carnegie Hero Fund Commission, hope that this gesture makes them proud of Arthur and the courageous man he was,” said Dyer.