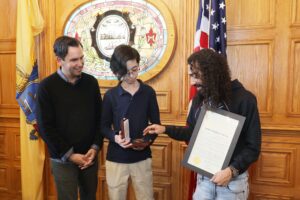 Two years earlier Capuano entered the 50-degree Newark Bay near Bayonne, New Jersey, after witnessing a man struggling to escape his car after it plunged into the bay. Responding to cries for help, Capuano, a 29-year-old aquatic program administrator, removed his prosthetic lower leg, scaled a nearby fence, scrambled over large rocks, and entered the water. He swam to the driver’s door of the car and grasped the man under the arms, and pulled him through the driver’s window despite rising water levels inside the sinking vehicle. Capuano positioned the man on his back and swam toward shore where others assisted the driver from the bay.

The mayor’s office issued Capuano a certificate and formally thanked him for his bravery on social media.