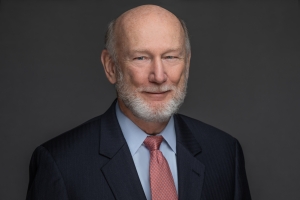 It was 29 years ago that the late, great Tom Hilliard asked me to become a member of the Hero Fund Commission. I didn’t have a clear idea of what I was getting into, but I trusted Tom. As usual, I was right to do so. When the Hero Fund leadership asked me to serve as President in 2001, I jumped at the chance. Again, it was the right choice. What an incredible two decades it turned out to be! I can describe what made it all so special in just one word: People. But let me divide “people” into three groups.

The first group who lit me up for 29 years actually consists of one person — none other than Andrew Carnegie. The Carnegie Hero Fund is still alive and vigorous after 119 years partly because of his endowment, but mostly because of his brilliant vision. He had such moral and practical clarity to his vision of heroism that it is a joy to work for its realization.

The second group of people who brought joy to this mission are the citizens of what I call Carnegie World. (You, my valued readers, are participants in Carnegie World yourselves.) First among them, and closest to me, are the staff and board members of the Hero Fund, my great companions and friends of 29 years. Some of my closest relationships are with members of this group. I worked with two remarkable chief executives of the Hero Fund, Walter Rutkowski and Eric Zahren. There might not be two more different men on this planet, but each demonstrated superb energy and ability pursuing Andrew Carnegie’s vision. Both became great friends.

Beyond the Hero Fund itself are the people of the other 20 or so Carnegie organizations in the United States, Canada, and Europe. The late Vartan Gregorian of the Carnegie Corporation was especially kind and generous to the Hero Fund, one of the smallest of Andrew Carnegie’s creations, and he was equally so to me. He involved me in his effort to build a community among the Carnegie organizations. It was a mystery why, but I loved being part of what he was doing. This also introduced me to two remarkable great-grandchildren of Andrew Carnegie, Linda Hills and William Thomson. Linda has long been a member of the Hero Fund Commission and Will be a leader in Carnegie World in general. Will laid on some challenging tasks, but the two of them provided energy and vision that made it all easier.

The most important group of people is the third, the Carnegie heroes themselves. It is an honor to understand their stories and deeds and such a pleasure to meet them in person. Occasionally some kind soul will compliment me on the wonderful work of the Hero Fund. I thank them, but quickly add that it is the Carnegie heroes themselves who did the real work and all too often paid a very real price. We are just the scribblers who chronicle their deeds or, in this writer’s case, comment on them. One of the great things about the first two groups of people I am thanking is their respect for and deference to the heroes. It’s not about the Hero Fund, it’s about the heroes.

There are tradeoffs in all of this. As stirring and inspirational as the rescues are, the price paid by Carnegie heroes can be steep, and this has had a deep personal impact on me. The hard reality is that about 20 percent of the Carnegie Medal recipients die in the rescue attempt. Others suffer serious injuries and, in my experience, almost all the rescuers have a lot to deal with emotionally in the aftermath. We are still learning about this. Sometimes someone will wonder out loud in my presence if they could have found the courage to perform one of these heroic rescues. I always advise them, “Pray that you never find out.” This heroism thing is a serious business.

I can condense the joys and difficulties of 29 years in one episode, a ceremony awarding the Carnegie Medal to the survivors of 12 coal miners who died attempting a rescue of a co-worker in the Brookwood Mine disaster in 2001.

The families of the rescuers, parents and wives, almost all with children, assembled in the rotunda of the Alabama State Capitol in Montgomery. Alabama Gov. Donald Eugene Siegelman and I presented the Medal to the families — a glorious and excruciating task. The weight of what had been lost hung in the room. What could a handful of medals mean in the face of that? What could my words possibly mean? Fortunately, I could fall back on Merle Travis, America’s true poet laureate. For whatever reason, I had memorized his words:

Where the danger is double and
pleasures are few.
Where the rain never falls and
the sun never shines,
It’s dark as a dungeon way
down in the mine.

I don’t know if this helped the families, but it did stabilize me and help me fight back the coming tears. So, I confessed what I believed, that words and medals could not bring back their sons,
husbands, and fathers. But what the Hero Fund could do, I said, was to recognize and proclaim to the world their heroic deed, performed in the lonely dark of a dungeon more than a thousand feet below the earth. We could pledge that what they had done that day would not be forgotten. It was a terrible scene there, with the grieving families. It was also glorious. It is glorious work to keep that promise to those 12 men and to all the more than 10,000 heroes who have earned the Carnegie Medal.