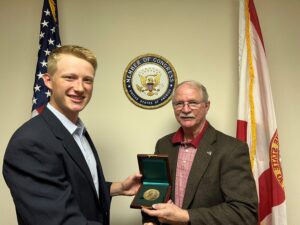 In May 2020, Johnson, then 19, saved a 13-year-old who was carried 450 feet from shore by a rip current in the Atlantic Ocean off of Neptune Beach, Florida. Rough conditions made it difficult for the boy to stay afloat. Johnson, of Jacksonville, Florida, was at the beach and, upon seeing the boy, entered the water despite 4-foot waves. He swam to the boy, grasped his forearm, and towed him back toward shore, but the boy repeatedly submerged him in an effort to keep himself above the surface of the water. Johnson repositioned the boy to hold him across the chest and then back-stroked toward the beach. At about 75 feet from shore, Johnson was nearly exhausted and struggled with keeping them both above the water’s surface, but two men took the boy from Johnson and brought him to the beach.

Johnson said he “floated, limped onto the beach. I don’t remember ever being that exhausted before. I was 100 percent on empty.”

“Ross demonstrated a great deal of courage and his willingness to act in a moment of need speaks to his leadership qualities and personal values,” Rutherford said in a Facebook post about the ceremony.