Brown’s Island is a 2-mile-long island nestled in the waters of the Ohio River. Surrounded by the rolling hills of Weirton, West Virginia, this little crop of land was home to a coke factory dubbed “the steel mill of the future.” This state-of-the-art facility was intended to pave the way for a brighter, cleaner steel industry capable of reducing pollution and waste. The $55 million, 87-oven Weirton Steel facility was to be the pinnacle of a more enlightened industry. Still, a fateful morning in December 1972 derailed that steady march toward modernity.

In the northern section of the basement of the Weirton Steel building, a group of workers gathered to sip coffee when several employees smelled gas. A worker ran up to the second floor where he alerted Bernard R. Eafrati, 54, heater helper, to a potential gas leak in the basement. Another man alerted the first-aid station, which dispatched a nurse and ambulance attendant.

Meanwhile, Eafrati and others descended the stairs to the figuring section of the basement. As they reached the base of the steps, an explosion blew out the basement ceiling, which was made of at least 6 inches of concrete, and the similar ceiling of the floor above it. In an instant, the lights illuminating the basement were snuffed out, leaving the workers and Eafrati blind in the darkness of the Weirton Steel facility. The explosion killed 19 men instantly, ripped the basement door off its hinges, ruptured service lines, and started a fire that extended the entire width of a supporting wall dividing the north and south sides of the basement. Eafrati was positioned next to a vertical steel plate which protected him from certain death from the blast, though he did suffer a major injury to his foot and was rendered unconscious.

Nearby, at Ambulance Service Inc., Harvey W. Templin, 33, ambulance attendant, was on duty when he was dispatched to aid the workers trapped in the crumbling basement. He, and another ambulance attendant, John C. Bowers, 32, who was off duty, responded to the call, driving to the scene in an ambulance. The duo spent 20 minutes helping workers escape the dust and debris left in the aftermath of the blast, before donning air tanks, which contained 30 minutes of oxygen to go deeper into the building.

By then, Eafrati revived, moved farther into the basement, and, clinging to one of the steel columns supporting the ceiling, called out for help. Templin and Bowers heard the call and rushed to where the nurse and a group of company officials were located. Company officials and the owner of the ambulance company warned Templin and Bowers against entering the burning basement, which was still littered with debris and wreckage. The duo, along with the nurse, all carrying flashlights, paid them no mind and, carrying a stretcher, descended the stairway into the basement.

The foot of the stairs was dimly lit, but the rest of the basement was cloaked in darkness and the floor was covered in 3 inches of tepid water. Templin and Bowers called out for any survivors but received no response. A firefighter that had descended the stairs offered to tie ropes to the two men to pull them out if the rescue attempt was unsuccessful. Fearing the rope could become an obstacle to their safe return, the two ambulance attendants declined the offer, but they did tie a rope to the stretcher. 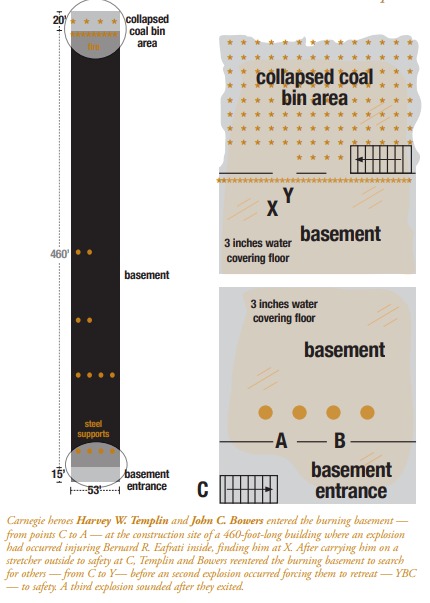 Templin and Bowers heard Eafrati call out for help from the darkness of the basement. The two men feared that Eafrati would be killed by a second explosion if they didn’t act. They headed toward the sound of Eafrati’s voice, their flashlights providing 3 to 4 feet of visibility. The nurse followed them to offer additional light. After 20 feet, she stopped while Templin and Bowers continued. The farther into the basement they walked, the hotter the water at their feet became. They proceeded 420 feet through light smoke and increasing temperatures toward the cries from Eafrati. Flames issued from the wall as Templin, lifting his mask, yelled out to Eafrati that another explosion might occur.

Seconds later, they found Eafrati. The two attendants placed him on the stretcher, and while still holding their flashlights, jogged with him back to the stairway. Once there, Eafrati informed Templin and Bowers that there were others still trapped in the basement. The two ambulance attendants felt that they would need to return to the basement once more, otherwise, the men might die without their help. While Eafrati was being treated for his wounds, a man brought another stretcher to Templin and Bowers. Stretcher in hand, the duo descended the stairs. They proceeded north at a sprint, knowing now that the pathway was clear after their recuse of Eafrati.

Templin and Bowers, unaware of how much oxygen was left in their tanks, were within about 15 feet of the support wall when another explosion occurred. The explosion was less powerful than the first but resulted in a fireball that issued through one of the basement doorways. The heat of the fireball singed their hair and the concussive force of the blast threw them backward. Fearing they might die, the two attendants retreated toward the stairway. They removed their masks and air tanks and sprinted to the exit to safety.

A third explosion occurred about half an hour later. Eafrati was hospitalized for 10 weeks for the injury to his foot, as well as first-degree burns to the head, legs, and one hand. Templin suffered minor ringing in his ears. Bowers suffered singed hair. All three men survived the explosions at the Weirton Steel building. Both Templin and Bowers were awarded the Carnegie Medal and a $1,000 grant each.