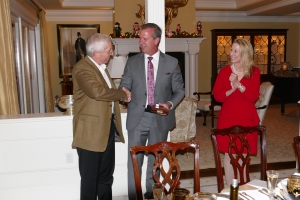 In a surprise ceremony, from left, Francis X. Pisano, shakes the hand of Carnegie Hero John E. Meffert, while Janan Pisano looks on. Meffert attended a dinner party held Dec. 8, 2018, at the Pisanos’s home in Coto de Caza, Calif. Meffert pulled Francis Pisano from a burning airplane after it had crash-landed on an Irvine, Calif., freeway in June 2017. Despite flames several feet high on the wings, Meffert stepped onto the wing, partially entered the plane and freed Pisano’s foot from the plane wreckage, before dragging him from the cockpit. Pisano told case investigator Susan Rizza that he was pleased to collude with the Hero Fund to surprise Meffert with the Carnegie Medal presentation.