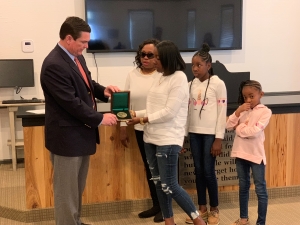 Maynor drowned in April 2017 while trying to rescue his 10-year-old godson from a current in dangerous surf off Eastpoint, Fla. The boy was playing in the Gulf of Mexico when a wave carried him away from shore to deeper water. He called for help. Maynor, 29, swam 75 feet to the boy. Reaching him, the two appeared to struggle and were carried farther from shore. Two others entered the water with a boogie board. Maynor pushed the boy toward shore, and one of the others grasped him and towed him to shore. The other man swam to Maynor and positioned him on the board, but the rough surf broke the board and separated the two. Maynor drowned.

“This award is something that will live on,” Smith said to local reporters after the ceremony, according to a March 20, 2019, Thomasville Times Enterprise article. Scott represents Georgia’s eighth district.