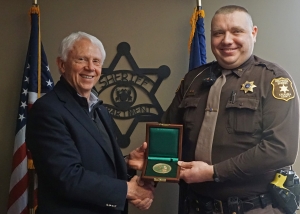 U.S. Rep. Jack Bergman, left, presents the Carnegie Medal to Carnegie Hero Benjamin M. Hawkins in a brief ceremony March 19, 2019, at the Kalkaska County (Mich.) Sheriff’s Office. On Feb. 22, 2017, Hawkins and a former Kalkaska police officer, then-Sgt. Blake Keith Huff, both crawled across the floor of a burning home in Kalkaska and pulled a paraplegic woman to safety as they retreated. She died five days later from severe burns to half her body. In a Facebook post, Bergman, who represents Michigan’s first district, stated that he was proud to present the award to Hawkins. “Thank you to Deputy Hawkins and all of the first district first responders for the great work that you do every day,” Bergman stated.