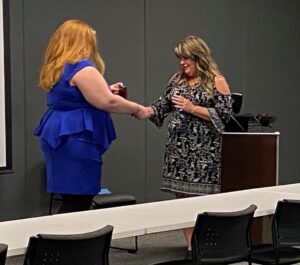 In an emotional ceremony held July 30, 2021, in the community room of the Hesperia (California) Police Department, the widow of two-time Carnegie Medal recipient Michael Robert Keyser, accepted his second Carnegie Medal in front of an audience of proud, but not surprised, family members. Hero Fund Outreach Coordinator Jewels Phraner presented the Medal to Lorri Keyser.

“Mr. Keyser is one of six people in the Commission’s history to have risked his life to an extraordinary degree not once, but twice,” Phraner said. “Helping others at whatever cost was clearly in his blood, and I am so humbled to meet those that such a brave and extraordinary individual held dearest in his heart.”

Keyser was killed when, while attempting to break the windshield of an overturned tractor-trailer to help its driver to safety, another semi-truck, hauling two trailers containing flammable lighter fluid, hit the overturned truck, pushing it and Keyser off the highway into the desert. The trucks immediate erupted in flames, and Keyser and the man he was trying to save perished.

“This was who Michael was,” said Lorri.

Keyser received his first Carnegie Medal 30 years earlier for saving a motorist from being electrocuted after a 1990 single-vehicle accident.