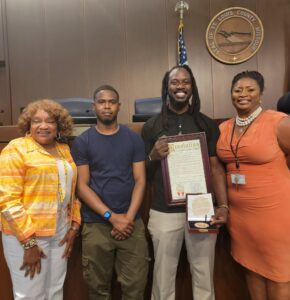 For a daring rescue in which he rescued the unresponsive driver from a burning vehicle, rescuer Antonio Morgan, of St. Louis, second from right, received the Carnegie Medal, presented by St. Louis County Councilwoman Shalonda Webb, right, in an Aug. 24, 2021, ceremony. Also pictured are, from left, Council Chairwoman Rita Heard Days and Keilen Robinson, the driver of the vehicle.

After a July 28, 2020, interstate accident in St. Louis County, Robinson, who was unresponsive, remained in the driver’s seat, his door wedged against a concrete median. Flames broke out under the hood and burned against the outside of the windshield. Among the motorists who stopped and responded was Morgan. Morgan entered at the front, passenger door, kneeled on the passenger seat, and grasped Robinson’s upper body, pulling his torso toward the door opening. Morgan withdrew, re-entered, pulled Robinson, and withdrew again. Smoke issued through the open door. Morgan entered a third time, kneeled on the passenger seat, and released Robinson’s seat belt, withdrawing upon hearing a loud explosive sound from the car’s front end. Robinson’s upper body then fell onto the road outside the car, and Morgan dragged him away before flames shortly engulfed the rest of the car.

“I wouldn’t be here without him,” said Robinson, who has developed a bond with Morgan since the rescue. Although he was taken to a hospital for treatment, Robinson was not burned.

In presenting Morgan’s medal, Webb said, “His unselfish love was rare. His sacrifice was rare.”