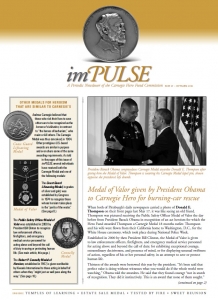 The September 2016 edition of imPULSE, the Commission’s quarterly newsletter, can be read online. This issue includes resumes of the latest awardees’ heroic acts, as well as articles about Carnegie Heroes who have received other recognition.  For example, Donald E. Thompson and the Public Safety Officer Medal of Valor, Terry Brown and the U.S. Coast Guard Gold Lifesaving Medal, and Robert P. Connelly (and other Carnegie Heroes) and the Robert P. Connelly Medal of Heroism.  Also included in this edition is an article detailing the Commission’s most recent medal presentations.

Furthermore, other features include personal essays. Firstly, Carnegie Hero Kenneth W. Mathews, who was awarded in 1965 for a water rescue he performed at the age of 14, wrote a piece on God’s role in his rescue. Second, Teresa Hardister, a granddaughter of Carnegie Hero J. Walter Reeder, penned an essay on her grandfather’s lessons and legacy.  Reeder was was a posthumous awardee of the Carnegie Medal after drowning while attempting to rescue a woman in 1956.