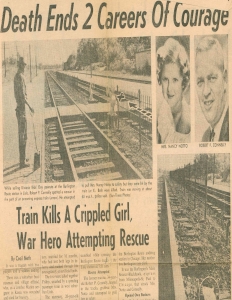 Friday, Sept. 23, 1966, was Kiwanis Kids Day in Chicago, Ill., and its suburbs, and the 105 area clubs of the worldwide service organization were combining manpower to sell peanuts in a one-day blitz to raise funds for their youth services activities.  It fell to Robert P. Connelly, a 34-year-old sales engineer, to volunteer for the activity at the Lisle, Ill., commuter train station during the morning rush hour.  Connelly, a Marine veteran with combat service in Korea, was a resident of Lisle, where he served as a village trustee and was a member of the Lisle Kiwanis Club.

At 7:30 on that warm morning 50 years ago, Connelly was on the platform when he saw 20-year-old Nancy M. Notto on the plank walkway that crossed the tracks through the station.  A secretary on her way to work, she had had mobility difficulties that required her to use a cane.  When she appeared to hesitate in the path of an approaching train—witnesses reported that she became rigid with fright and remained rooted in place—Connelly ran 25 feet from the platform to her, put an arm around her, and began to squat as if to lift her. Traveling in excess of 35 m.p.h., the train was unable to stop in time and struck both, inflicting fatal injuries.

The Hero Fund soon learned of Connelly’s actions through news accounts, and his nomination for the Carnegie Medal was supported by both the local Kiwanis Club and Kiwanis International.  In early 1967, Connelly was posthumously awarded a silver Carnegie Medal, which was given to his widow along with a monthly grant that continued for eight years.  Connelly also left a daughter, 13.

Moved by his heroism, Kiwanis International announced at its 1967 convention in Houston that Connelly, “by his unselfish action…put tremendous and dramatic meaning into the phrase ‘personal involvement.’  This man was the epitome of all that Kiwanis strives to be.”   The Kiwanians posthumously recognized Connelly with an award that would henceforth bear his name: The Robert P. Connelly Medal of Heroism.  Since its inception that year, more than 600 individuals have been recognized for risking their lives while “accepting personal responsibility in an effort to save the life of another human being.”  A nominee for the medal need not be a Kiwanian.

Primary awarding requirements for the Connelly Medal are similar to those of the Carnegie Medal in that the nominee must risk physical harm or death in the effort to save the life of another human being when he or she “might just as well pass along the way.”  Further, the Connelly nominee must not have official responsibility for the rescue effort—such as public safety officers and firefighters who perform rescues in the normal performance of duty.  Nominees’ acts of heroism are to be performed in a civilian context, with those by members of the armed forces carrying out their duties considered ineligible.  There can be no familial relationship between the nominee and the person rescued, and the acts of heroism must be called to the attention of Kiwanis International within five years of their occurrence.

Those recognized receive a bronze medal bearing Connelly’s image that is affixed to a walnut plaque with the inscription, “for service beyond the call of duty,” along with the recipient’s name.  A financial grant may accompany the award, which is given to individuals around the world.

Connelly is not the only person to have received both the medal that bears his name and the Carnegie Medal.  Within the past six years alone, there have been five awardees of both medals:

Cesar Andy Garcia and Michael Thomas Frawley, who joined forces on Nov. 23, 2014, to save a 9-year-old boy from drowning in a deep pool of water at the base of a waterfall in Scranton, Pa.

Douglas D. Killingbeck, who died attempting to save a teenage boy from drowning in the Huron River in Milford, Mich., on May 21, 2011.

Steven P. Zernhelt, who died June 26, 2010, attempting to save victims of an armed assailant in Northampton, Pa.

David A. Benke, who saved an indeterminate number of people from an armed assailant at a middle school in Littleton, Colo., on Feb. 23, 2010.