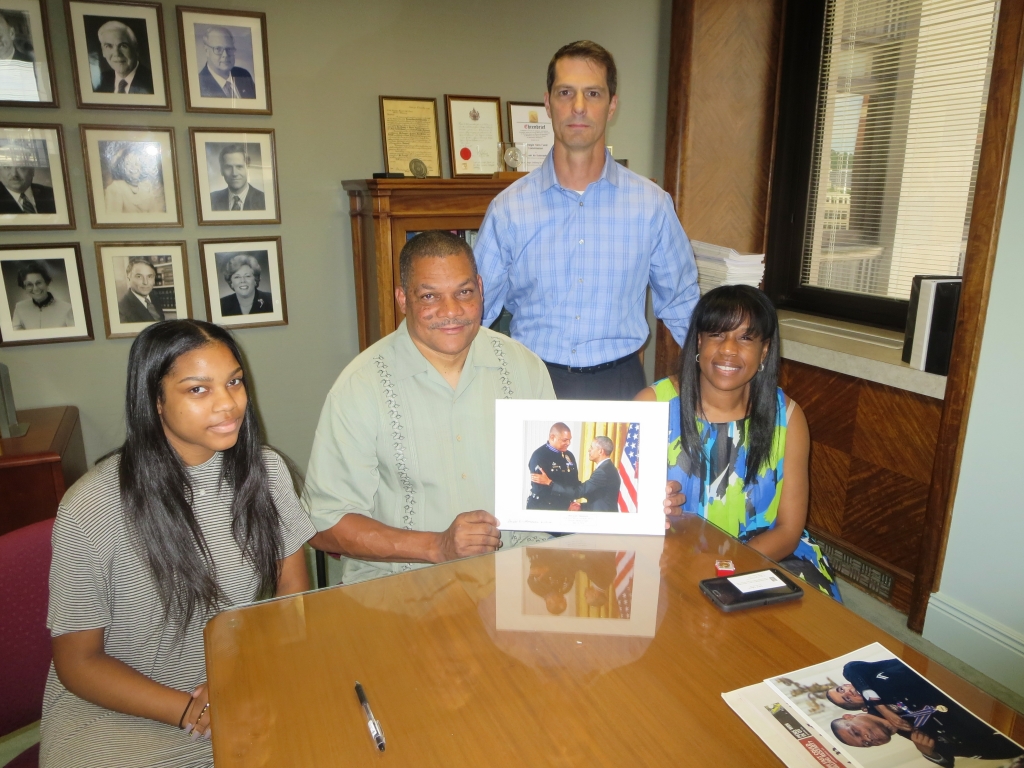 When both of Pittsburgh’s daily newspapers carried a photo of Donald E. Thompson on their front pages last May 17, 2015, it was like seeing an old friend. Thompson was pictured receiving the Public Safety Officer Medal of Valor the day before from President Barack Obama in recognition of an act heroism for which the Hero Fund awarded Thompson a Carnegie Medal 18 months earlier. Thompson and his wife were flown from their California home to Washington, D.C., for the White House ceremony, which took place during National Police Week.

Established in 2000 by then President Bill Clinton, the Medal of Valor is given to law enforcement officers, firefighters, and emergency medical service personnel for acting above and beyond the call of duty, for exhibiting exceptional courage, extraordinary decisiveness, and presence of mind, or for displaying unusual swiftness of action, regardless of his or her personal safety, in an attempt to save or protect human life.

Thirteen of the awards were bestowed this year by the president. “It’s been said that perfect valor is doing without witnesses what you would do if the whole world were watching,” Obama told the awardees. He said that they found courage “not in search of recognition. They did it instinctively. This is an award that none of them sought.”

For Thompson, who is a 29-year veteran of the Los Angeles Police Department where he is a bomb technician, the recognition—he also received his department’s Medal of Valor, the American Legion Officer of the Year Award, and a local Red Cross Hometown Hero award—is well deserved. On Dec. 25, 2013—a Christmas Day he’ll never forget—Thompson, then 54, was on his way to work at the bomb squad office at Los Angeles Airport from his home in West Hills. It was 2 p.m. and traffic was light on the 405 Freeway when he saw an approaching car crash into the concrete medial barrier. The vehicle burst into flame.

In uniform but not then on duty, Thompson knew instantly that any occupants of the car would have to escape very quickly. He left his truck and sprinted to the scene as 15-foot high flames issued from the rear of the vehicle and were spreading rapidly toward the front. He opened the driver’s door with difficulty and then, using it as a shield against the advancing flames, extended his upper body into the car. The heat was intense as Thompson searched for the release of the driver’s safety belt.

“Flames ran up my right hand and arm causing me to retract, wincing in pain,” Thompson told the Hero Fund. “A moment of realization then hit me. My life and the victim’s life were at their crossroads.” Thompson made one last attempt and released the safety belt to “a wave of relief (that) came over me.” He grabbed the victim, a 207-pound man, and quickly pulled him out of the car.

Two other men had approached, and they yanked the victim over the concrete divider and took him to safety. Thompson himself was then pulled over the barrier, and not a moment too soon, as flames were filling the car’s interior. Both he and the victim required hospital treatment, Thompson for second-degree burns to his face, arms, and a hand. They both recovered.

“Men and women who run toward danger remind us with (their) courage what the highest form of citizenship looks like,” President Obama said. “You put others’ safety before your own,” he told the awardees. “In your proud example of public service, you remind us that loving our country means loving one another.”

Admitting his regard for the Carnegie Medal, Thompson took advantage of being near Pittsburgh on a visit to his native Ohio in June. He stopped by the Hero Fund’s offices with his wife, Genevieve, and their daughter, Danielle, to meet with the staff, including Melissa McLaughlin, the case investigator who reported on his actions for board consideration. Thompson readily accepted the invitation of Eric P. Zahren, the Hero Fund’s executive director, to become a volunteer presenter of the Carnegie Medal to newly named awardees in the Los Angeles area.