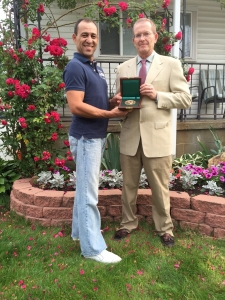 One day after Ronaldo J. Freitas of Somerville, Mass., pulled a woman from her crashed and burning car in Somerville on March 20, 2015, John Conley of Barrington, R.I., was emailing the Hero Fund with details of the act so that Freitas could be considered for the Carnegie Medal.  The award was made a year later, and Conley, himself a Carnegie Medal awardee, presented the medal to Freitas at Freitas’s home.  Of his involvement with the case, Conley told the Hero Fund that “there is a universal need to be a part of something that is larger than one’s self.”

Freitas, a contractor, was cited for his immediate response to a fiery, five-vehicle crash that he and his wife witnessed as they were taking their son to school.  The driver of one of the vehicles, a 26-year-old woman, was unconscious and badly injured in the driver’s seat of her car after it was struck from behind by another vehicle.  Flames broke out at the rear of the car and spread.  Freitas, then 45, bolted to the car, opened the passenger door, and, kneeling on the front seat, grasped the woman and pulled her to safety moments before an increase of flames engulfed the vehicle.

The woman survived, later telling the Hero Fund, “Ronaldo’s actions were instrumental in contributing to the miraculous recovery that I’ve had.  That act of heroism made everything else possible.”

Conley, a chiropractor, was awarded the medal in 2011 for helping to save an elderly woman from her submerging car after it entered New Bedford (Mass.) Harbor at a marina.  Then 54, he had to dive three times to the car to pull the woman through the window of its driver’s door.

The award was given in recognition of Wayne Hoffman’s sacrificial actions of Dec. 23, 2014.  That afternoon, he and his wife were walking their dog at a resort in Tofte, on the shore of Lake Superior at the northeast tip of Minnesota, where they were vacationing.  They saw another guest at the resort, a 40-year-old man, walk from the swimming pool facility and sit on a ledge about six feet above the surface of the lake.  When they next saw him, he was struggling in the rough, 36-degree water, unable to return to the ledge.  Hoffman, 66, lay and reached for the man but was pulled into the water.  Both men drifted from shore and drowned.

“He was the kind of guy who would help anyone with no thought whatsoever for his own safety,” his wife later told a reporter.  “He was my hero,” his brother Bruce said.  “The things he did in his life I tried to copy, or live like he lived.”

In memory of her husband, and out of gratitude for the kindnesses shown to her at the time of his death by the Cook County (Minn.) Sheriff’s Department, Mrs. Hoffman donated the Carnegie award’s financial grant to that department, asking that it be used in some way to help save the lives of others.  Sheriff Patrick Eliasen told her the grant would supplement gear and training for emergency responders in a way that would honor Hoffman’s sacrifice.

Harris’s rescue act was also water-related.  In 1962 at age 21, he entered a car that had submerged in a deep creek to save an 8-year-old girl from drowning and attempt to save her older sister.  He was awarded the medal the following year.

The Hero Fund is currently seeking Carnegie Medal recipients to volunteer as in-person medal presenters for new awardees.  The volunteers represent the Commission in delivering the medal to those awardees named within their geographic areas, assisting when available and with the consent of the newly named awardee.   Executive Director Eric P. Zahren said that the Hero Fund is specifically interested in presenters in the Midwest, Mountain, and West Coast regions of the U.S. and in all of the Canadian provinces and territories.  Travel expenses are reimbursed by the Commission.

Those wanting to know more about the volunteer program are asked to contact Zahren by email:  eric@carnegiehero.org.