The events leading up to the 1959 heroism of Louis Gorman in behalf of seven other men held hostage at their workplace for several hours began with a hunt for a 21-year-old Jerseyville, Ill., man wanted on suspicion of committing three homicides across the Midwest. Jerseyville police spotted the man arrive home but as they made their presence known, the man fled by car and by foot, eluding officers once again.

Upon word that the assailant was seen, more than 100 police, state troopers, and sheriff’s deputies responded to Jerseyville and hurried to place roadblocks on every route out of town.

They successfully had the town surrounded, but that did not stop the violence, as the man shot and killed a train brakeman who threatened to reveal his hiding place in a creek.

Following the killing, the assailant made his way to the Jerseyville Gorman Brothers’ Builders supply firm on Franklin Street and broke out a glass panel of an exterior door that opened to a corridor between a private office and the building’s men’s bathroom. Once inside, he cut a piece of cardboard and used it to replace the missing panel and camouflage the damage. He then concealed himself in the private office for the rest of the night.

Meanwhile the residents of Jerseyville endured the noise of planes, helicopters, and bullhorn announcements about the killer through the night.

Around 7 a.m. the following day, co-owner Gorman arrived to the office with truck drivers Robert P. Cordes and Charles J. Kroeschel. Their ignorance to the man’s presence vanished when Kroeschel noticed broken glass on the floor. As the last to leave the previous night, he told Hero Fund Case Investigator Irwin M. Urling, that he felt unnerved realizing the door panel had been broken since then.

“Louis, I think that man’s around here somewhere,”

Kroeschel called out to Gorman, who was in the bathroom.

Just then, the assailant appeared, armed with a .22-caliber semiautomatic rifle that held 19 rounds. With 35 more cartridges in his pocket, the man ordered Cordes and Kroeschel to raise their hands, enter the office, and sit with their backs against the south wall.

He positioned himself in the doorway, which was obscured from outside view. He then ordered Gorman out of the bathroom. 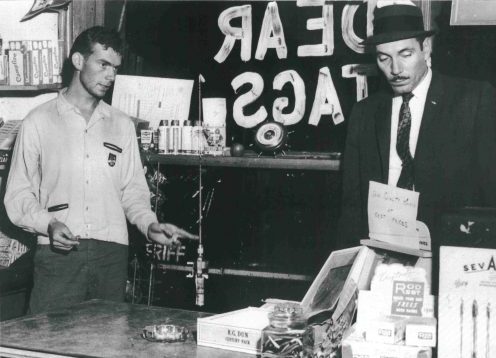 A United Press International photo depicting the assailant, left, describing to detective Robert Webster the manner in which he robbed and killed a Missouri bait shop owner before he returned to Jerseyville, Ill., where he killed another man and held eight others hostage at their workplace. One of the hostages, Louis Gorman, saw an opportunity to free himself from captivity, but, fearing the assailant would kill the others, chose to return to the office building. He later pretended to stumble in order to take down the assailant.

Meanwhile, inside the bathroom, Gorman hastily opened the bathroom window, but failed to dislodge its screen. Hearing the commotion, the assailant threatened to shoot through the door and at one of the truck drivers if Gorman didn’t exit the bathroom. Gorman verbally obliged and exited the restroom with his hands up, joining his coworkers seated on the floor.

While keeping his rifle pointed at the three men and staying in their line of sight, the assailant moved to the main office. Squatting behind a counter to conceal himself from anyone outside the building, he demanded that Gorman open the safe. Gorman told the man that none of the hostages knew the combination, and, despite arguing and making threats, the man eventually acquiesced.

Each time the assailant swiftly threatened them with the gun and ordered that they sit with their peers, and after the eighth man arrived, he inquired about whether any more employees could be expected. Gorman indicated that besides his brother, only customers were likely to stop by.

Following the assailant’s orders, Gorman wrote on a piece of cardboard that the office was closed until 1 p.m. and placed the sign on the building’s main door.

As he did, he noticed a man across the street. Gorman frantically, and without making the assailant suspicious, tried to attract his attention but only received a friendly wave of greeting.

Defeated, he returned to the small office to join his hostage coworkers. The assailant then turned his attention to the safe, directing Pohlman, keeper of the safe’s lock combination, to open it.

Even on normal days the lock to the safe proved tricky to operate. Pohlman was nervous and stumbled over the combination as the assailant, irritated, made threats. Finally, Pohlman managed to unlock the safe, and, as directed, threw its money onto the floor and then rejoined his colleagues against the wall.

Targeting Kuehnel next, the assailant forced him to crawl on hands and knees and remove the money from the hostages’ wallets. Kuehnel obeyed.

Tensions were high, and the men tried bargaining with the man. They said that the assailant could exit the building’s south door and, sheltered from view of the highway by passing railroad cars, return to the woods where he previously hid or take a company truck, stressing that he wouldn’t be stopped at a roadblock if he were driving a Gorman truck.

Ignoring their musings, the assailant knew what he needed most was time before the men could contact the police. He ordered Gorman to cut the building’s phone line using a 6-inch paper knife he had picked up in the office. He also speculated aloud whether to kill some of the men to incite fear of sending the authorities after him in the others but ultimately decided that tying them up would suffice.

The man scanned his surroundings for rope and saw some atop a 20-foot long sand and gravel bin, located about 30 feet east of the building’s east door. The assailant selected Gorman to retrieve the rope and ordered the other hostages to lie face down with their heads against the wall. He covered his gun with plastic and ordered Gorman to precede him out the door. Before the two men exited, the assailant threatened the others, stating he would shoot Gorman if any of them were uncooperative.

Once outside, Gorman ascended the bin’s ladder as the gunman stood watch so he could see Gorman and the other men through a window. Gorman climbed 36 feet and entered the bin. He cut the rope slowly, stating later that he hoped someone outside would take notice, while also brainstorming ways to freedom.

Gorman said that he thought he could submerge into the sand and that the gunman wouldn’t be able to shoot through 4 inches of timber and 14 feet of sand. To climb the ladder would incapacitate the assailant from shooting and, in that time Gorman could call for help and throw sand on the man without exposing himself.

According to Urling, Gorman’s perception of the assailant was that he was absolutely dangerous, pitiless, and completely at home with firearms. He could see that he was sharp and quick.

While he pondered, the assailant seemed to recognize his own vulnerability while Gorman remained in the bin. Reformulating previous threats, he called up to Gorman, saying he’d “knock over five or six of his buddies” on his way out if Gorman tried to draw attention from a passerby or provoke trouble.

Familiar with the gun’s quick fire, Gorman told Urling later that he feared assuring his own safety would be deadly for the others. Meanwhile, in the office, the seven men were unable to see outside. Although they discussed plans for action, they were scared to move, call out, or act lest their actions lead to Gorman’s death.

Gorman descended the ladder, gathered the rope, and with the gunman returned to the office.

According to Urling, Gorman’s perception of the assailant was that he was absolutely dangerous, pitiless, and completely at home with firearms. He could see that he was sharp and quick.

Although, Gorman was reassured by the fact that firing the gun would be detrimental to the man’s hiding place, he worried that the assailant wouldn’t wait until 1 p.m. to take some form of action.

As instructed by the gunman, Gorman tied up the men, first, Kuehnel; then Fitzgibbons, and then Smith. He tied their ankles together and their hands behind their backs. According to police reports, the assailant’s plan was for Gorman to tie up the others, and he would restrain Gorman himself.

In his notes, Urling described Gorman as shrewd and observant by nature. He stated that during his captivity, Gorman had watched the gunman constantly and had completely assessed the man’s strength, agility, and habits. Further, he highlighted Gorman’s observation that after any sudden movement, the assailant would throw the gun barrel up to avoid firing in case of a stumble.

Keeping this study in mind, Gorman finished tying Smith and stood between him and Andrews. He stretched as if his back had cramped and feigned a reel as if to faint. With a contrived misstep, Gorman fell east and just as he had hoped, the assailant threw up the gun barrel.

Gorman stepped over the other hostages and then threw himself forward, striking the barrel with his left arm and the gun with his wrist. He then punched the gunman’s face and struck his right arm inside the elbow with his left forearm. Gorman seized the man’s throat in his own right hand and threw him back against the safe. The assailant dropped the gun and grappled with Gorman. 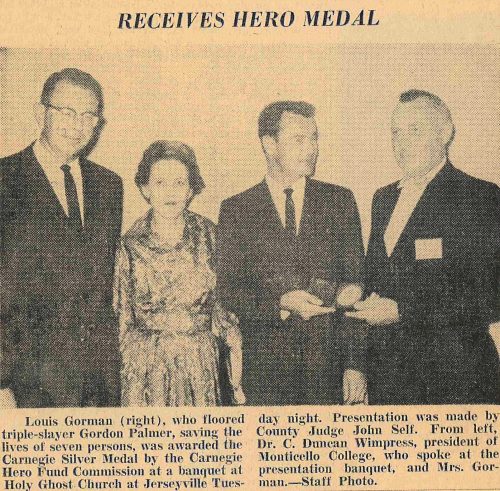 A clipping from the Alton Telegraph about Louis Gorman receiving the Carnegie Medal. The Jerseyville, Ill., chamber of commerce organized a community assembly for presentation of the Medal.

Gorman called out, “Come on, boys!” and the untied men, Andrews, Cordes, Kroeschel, and Pohlman all stepped over their tied counterparts. They secured the gun and assisted Gorman with the assailant.

One of the men summoned help, and authorities arrived and took the assailant to jail. He was tried and found guilty for three murders.

Gorman and the men were cramped and agitated, but they recovered.

After having spent three years in the Army and serving as a military policeman in charge of a prison, Gorman revealed to Urling that he considered his tackling the assailant to be the greatest danger he’d encountered.

A successful man, Gorman and his brother owned the largest builders’ supply yard in the county. He opted to refuse the pecuniary award from the Fund because he didn’t feel in need of assistance. Gorman received a silver Carnegie Medal in 1960. Jerseyville Chamber of Commerce organized a community assembly in his honor that took place June 21, 1960.