A Carnegie hero laid to rest in Indonesia now has a grave marker denoting the heroism he exhibited nearly 60 years before his death.

“Few natives in this population have the slightest idea who Andrew Carnegie might be,” Link Luckett, then 86, wrote to the Commission in 2014, “But they all know what a hero is. It is the same word in the Indonesian language as in English.”

Luckett was 32 years old when he piloted a helicopter that rescued two injured climbers from near the top of Mt. McKinley in Kantishna, Alaska, for which he received a silver Carnegie Medal. Three years earlier he and his family had moved to Alaska where he started his helicopter charter business.

In May 1960, four climbers were descending from the summit of Mt. McKinley when they fell 500 feet down a slope to an ice field that was at an elevation of 17,200 feet. John S. Day, 51, sustained a fractured ankle, and Peter K. Schoening, 33, suffered a brain concussion. Other climbers sent out a call for help, but the oxygen-deprived and frigid atmosphere made rescue difficult. For 48 hours, planes dropped supplies, but their pilots dared not land. Hearing radio calls for helicopters, Luckett responded, despite the fact that his helicopter was not supposed to ascend beyond 16,200 feet.

After an exploratory flight to the area and discovering that some of the helicopter’s dashboard instruments stopped working at such a high altitude, he returned to a rescue base, lightened the load of the helicopter as much as possible, including removing one of its doors, limiting the gas tank to only 10 gallons, and removing the engine’s battery after the engine was started.

Despite the helicopter becoming sluggish as he passed through a heavy cloud layer, he piloted the helicopter to the ice field and landed. Fearing that the engine would stall, he remained at the controls while the other men in Day’s party brought Day to the helicopter. Luckett took off, the helicopter bouncing and moving over a steep downward slope before becoming airborne. He took Day to the rescue base, with only three gallons of fuel to spare.

He re-fueled and took off again, despite gusty winds and heavy clouds. He touched down on the ice field several times, looking for a landing spot, but failed to find one. Fearing that the helicopter might run out of fuel if he dallied any longer, he returned to the base, refueled, and took off again. By then the temperature was -30 degrees and the wind blew in gusts of 10 to 30 m.p.h. He landed and kept the engine running while Schoening, who by then had a badly frostbitten hand, was aided aboard.

As the helicopter took off, it bounced along the ice diagonally to the wind and then slowly became airborne. Although the engine backfired occasionally, Luckett piloted the craft safely back to the base. A blizzard that afternoon marooned the other men for four days. Day was hospitalized two months. Schoening required amputation of the tips of three fingers. The landings and take-offs by Luckett at 17,200 feet were the highest ever made by any type of aircraft.

Luckett later continued to fly for companies out of Southeast Asia, eventually settling in Indonesia with his wife, Ulif.

“We built our ‘dream house,’ on a mountaintop near the city of Bogor,” Luckett wrote to the Commission in 2014. Luckett and Ulif returned to Arkansas in 2013, and Luckett died in 2018.

In 2014 Luckett said that he passed the medal on to his grandson and that it was “under safekeeping.”

Daughter Linda Luckett wrote to the Commission in 2019 requesting a grave marker for her late father.

“You might be interested to know that it will be going to a small village in Indonesia, about an hour from Jakarta. Link spent the last 45-plus years there in a home he and his wife had built. They have a little family graveyard there, and that is where his headstone and remains are,” she wrote. 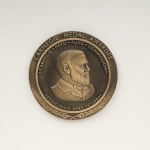 Grave markers are available to the families of deceased awardees in order to further honor those who have been awarded the Carnegie Medal. The size of the medallion is 3.75 inches in diameter and is designed to replicate the look of the Carnegie Medal. It can be displayed on an awardee’s stone or bronze headstone, or on a flat-faced urn. The medallion will be sent with a packet containing supplies to affix it and directions for application. To order the medallion, email us at carnegiehero@carnegiehero.org.