2019 was a relatively quiet year for the Hero Fund compared to the previous year’s excitement of our 10,000th medal awarded. But 2019 was nonetheless a landmark year as the celebration of Andrew Carnegie’s legacy continued through to the 100th anniversary of his death in August. Now in its 116th year of operation, the Commission strives to continue its core mandates while remaining responsive to modern times.

The beneficiary systems within society to support heroes and families have changed, and the Commission must continue to change to adequately address their needs.

Commission members have begun further exploring the psychological effects of heroic rescues, with expected research on this important issue to continue. It is the hope that the fruits of these research efforts will better position the Commission to continue to effectively support those who need us the most.

There was again much discussion regarding awarding requirements, as there should be. Founder Andrew Carnegie expected the Commission to evolve in all of the rightful respects related to our work.

Of specific interest was the Commission’s awarding considerations as to life-saving acts by police and first responders. Criminologist and law enforcement expert Dr. R. Paul McCauley joined the Commission at its March 2019 meeting and shed light on historic and legal guideposts that could help the Commission determine the meaning and nature of “above and beyond the call of duty” so that Commission members can consider these cases with eyes wide open.

The Carnegie Medal of Philanthropy and associated events held in October in New York City once again not only recognized today’s greatest philanthropists (on Carnegie’s model), but the event also presented opportunities to share and discuss the Hero Fund’s mission and current priorities with sister institutions near and far. Once again, it served as a backdrop for close collaboration with Carnegie’s European fund representatives in attendance.

The Commission remains strong, relevant, and respected in its work. And most importantly, it remains true to the hopes of its founder in regard to its impact on heroes and society at large.

Half of the posthumous cases awarded in 2019 involved parents saving or attempting to save their children.

Once again, our heroes in 2019 were diverse in all respects. More detail follows, but a few highlights:
• There were 73 awards for 59 total acts
• Burning vehicles were most common, followed by drowning.
• Awardees ranged from 16 to 72 years of age.
• They came from 27 U.S. states and five Canadian provinces.
• Eight heroes gave their lives. We will not forget their sacrifice.

In Canada, five provinces were accounted for in 2019, with Alberta and Nova Scotia home to the most Canadian Carnegie heroes (two each), and British Columbia, Newfoundland and Labrador, and Ontario each having one. In terms of where acts occurred, the spread is similar: two acts in British Columbia, one each in Ontario, Alberta, Nova Scotia, and Northwest Territories.

Posthumous awards — Eight Carnegie Medals were awarded posthumously, with seven heroes drowning while rescuing or attempting to rescue others and one rescuer dying in a burning building. 2019 saw a 3.2% decrease in posthumous awards, and it was nearly half of the Fund’s historical average.

Age and Case Type — The oldest Carnegie Hero awarded in 2019 was 72-year-old Steven W. Fitzpatrick, and the youngest was 16-year-old Ryan Scott McIlwain.

Of the awards, a total of 59 acts were investigated in 2019, the most frequent type of case was the 23 rescues from a burning vehicle, followed by 18 drowning rescues. 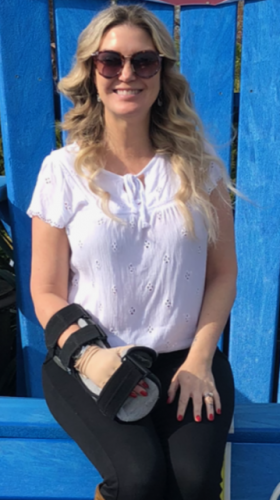 Other notable cases include:

• Julie K. Callaghan, who was in her vehicle at a railroad crossing in Chilliwack, B.C., when 44-year-old Matthew Jarvis, in a motorized wheelchair, got stuck on the tracks. Warning lights flashed as a train approached at a speed of about 50 m.p.h.

Darting beneath the crossing gate, Callaghan and another woman attempted to lift and pull the wheelchair from the path of the train. Callaghan looked over her shoulder, and seeing the train bearing down on them, began to move away from the track, when the train struck Jarvis and Callaghan’s hand. Jarvis was killed. Callaghan sustained broken bones and other injuries to her hands, which required surgery, followed by the partial amputation of her dominant hand in October. She continues to undergo physical therapy and hopes to be fit for a prosthetic in the future, she said.

• Van L. Anderson, 54, a paving equipment operator of Chattanooga, Tenn., on Feb. 17, 2018, rescued a 3-year-old girl from the effects of a hazardous acid, after a semi-truck containing 5,000 gallons of toxic monochloroacetic acid hit the pickup truck containing the girl and her mother and came to rest atop the pickup on an embankment. The acid was escaping the tanker and flowing into the pickup truck.

Ignoring a 911 operator’s warning not to approach the wreckage and despite the acid continuing to flow into the pickup truck near the girl, Anderson, who heard the accident from his house nearby, moved to the pickup.

While standing on a rock outcrop adjacent to the pickup, he reached inside the vehicle, unfastened the girl from her car seat, and lifted her from the truck.

Anderson carried the toddler away from the wreck to safety. She had facial burns from the acid. Her mother died in the accident. 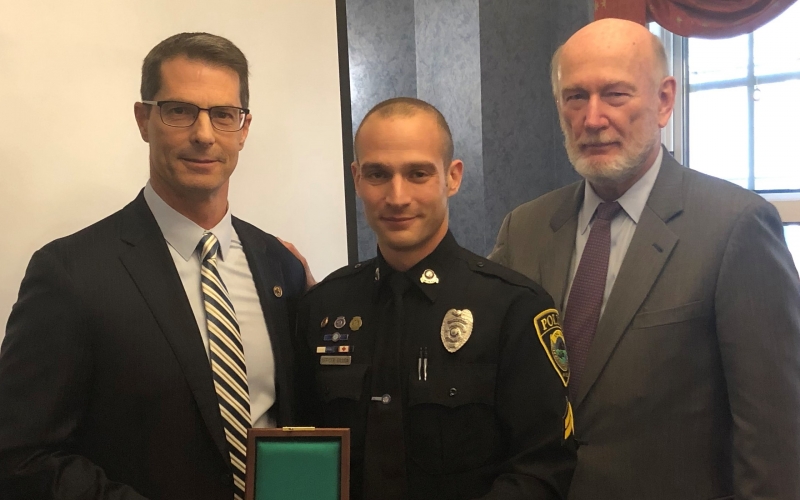 Hero Fund President Eric Zahren, left, and Chair Mark Laskow, right, presented the Carnegie Medal to Phillip H. DiLuca Nov. 15, 2019. The ceremony was featured in an article that appeared in The New York Times about the Commission.

• Off-duty Police Officer Phillip H. DiLuca was on his way home from work when he heard of a mobile home fire on his police radio. Neighbors of a 53-year-old man banged on his doors and windows, trying to rouse him from sleep.

DiLuca arrived and forced open a rear door. Encountering intense heat and smoke, he crouched low and moved quickly through the house, using a T-shirt to shield his nose and mouth from smoke.

DiLuca searched two bedrooms before finding the man in the third. DiLuca shook him awake and guided him through thick smoke and nearby flames out the back door.

The chief of police of DiLuca’s department stated that DiLuca went above and beyond the call of duty to enter the burning home without protective gear. In November, officer DiLuca, along with his family and police chief, visited the Hero Fund office in Pittsburgh.

DiLuca was presented his Carnegie Medal during a ceremony at the Allegheny HYP Club. 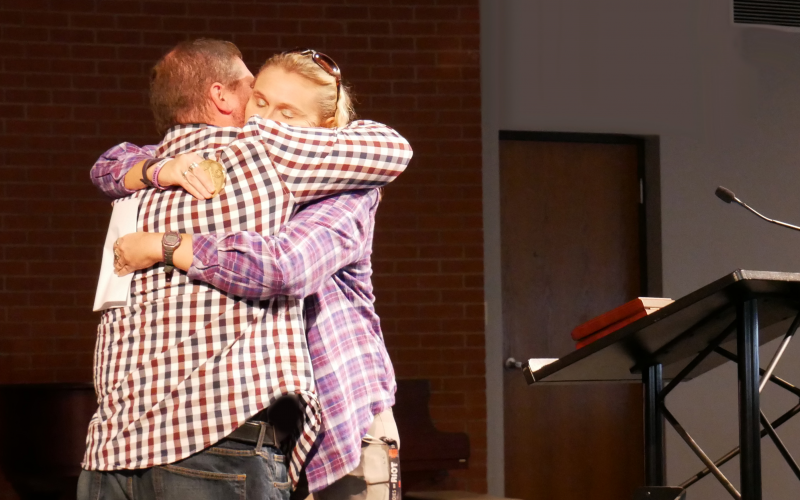 The Rev. Ian Stamps, left, hugs Carnegie Hero Angela Lynn McQueen, of Mattoon, Ill., after presenting the Carnegie Medal to her at a private ceremony held Oct. 6 at Broadway Christian Church in Mattoon.

• Mattoon, Ill., high school teacher Angela Lynn McQueen saved students and staff from a school shooter. As the 14-year-old boy fired a .40-caliber, semiautomatic pistol toward other students, McQueen approached him and lunged for the gun. She forced the assailant’s hand upward toward the ceiling and held it there until the gun was emptied. McQueen disarmed him as a school resource officer arrived to handcuff him.

One student was hit with a bullet and recovered. McQueen suffered minor hearing loss in both ears and other injuries. The remaining students an staff escaped the cafeteria unharmed.

Each of the year’s awardees received a one-time grant, the amount of which was increased by the board from $5,000 to $5,500 at its September meeting. Awardees who are of pre-retirement age are also eligible for scholarship assistance, defined as aid applied toward the academic costs of tuition, books, and fees.

In 2019, $275,000 was budgeted and $168,365 spent by year’s end. The students who receive the scholarship assistance are diverse and impressive, each a hero themselves or a dependent of a disabled or posthumous awardee.

Regarding the beneficiaries, who are primarily the widows of posthumous awardees, $252,520 was paid in 2019 (budgeted: $273,000) in monthly installments that averaged $398; the number of beneficiaries remained steady at 49 at year’s end.

Press coverage of heroic acts, awarding, and medal presentations was robust, and website and social media account public engagement saw continued increases across the board.

In December, The New York Times ran a delightful piece in its style section about the Commission’s mission and staff, with a focus on awardees, new and old.

Personal medal presentations to awardees continued at a rigorous pace, with almost all receiving their Carnegie Medals from a Commission representative, public figure, volunteer presenter, or case principal.

No changes were made at board level during the year. At the staff level, former intern Abby Brady joined the staff in January as a full-time operations and outreach assistant/archivist, and has made an immediate and meaningful impact.

Many thanks to the staff for their hard work, without which the Commission would not have had such a productive and memorable year.