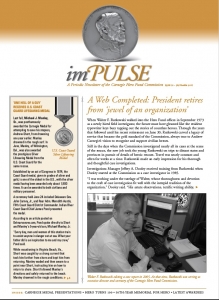 The September 2017 edition of imPULSE, the Commission’s quarterly newsletter, can be read online. This issue includes resumes of the latest awardees’ heroic acts, as well as updates on several awardees, including Michael J. Manley who was honored with a U.S. Coast Guard Lifesaving Medal, J. Manuel Corral who celebrated his 100th birthday, and John P. Williams, who earned two law enforcement awards.

Also included in this edition is coverage of the Commission’s recent medal presentations including:

Other features include updates on the Medal of Philanthropy and a celebration of several Commission service anniversaries and the retirement of Walter F. Rutkowski after 41 years of service.