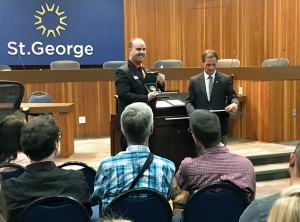 In March, 2016, Hamblin went to the aid of a woman who was unresponsive in the driver’s seat of a pickup truck that was moving erratically on a four-lane highway.  Despite wearing a medical boot because of recent foot surgery, Hamblin ran onto the highway after the truck, stepped onto the running board at the driver’s door, and grabbed the steering wheel through the open window.  Hamblin then guided the truck more than 100 feet along the turning lane and across two lanes of opposing traffic into a parking lot.

Stewart, who represents Utah’s second district, presented the medal to Hamblin in front of Hamblin’s family and friends.

“Joseph chose to be a hero rather than a witness, taking bold action regardless of the risk it presented to his personal safety. Acting without hesitation and with tremendous precision, Joseph saved a life and eliminated a great risk being posed to others,” Stewart said.