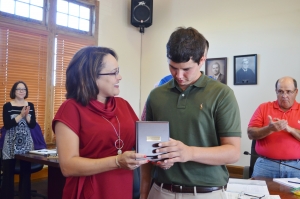 More than a year earlier, Page, then 16, was piloting a flat-bottomed boat in the Bogue Chitto River near Bush, La., when it capsized at the base of a dam as he was helping two boys who had been thrown in the boil of water at the base of the dam and were trapped.

Maneuvering to the boys, Page held to them and used his overturned boat to blunt the water’s strong flow until others could respond to the scene by boat and take them to safety.

At the ceremony, Page also received a flag that had been flown over the capitol building, presented by Wyatt Lobrana, district director for U.S. Rep. Ralph Abraham, who represents Louisiana’s fifth district. Read more.