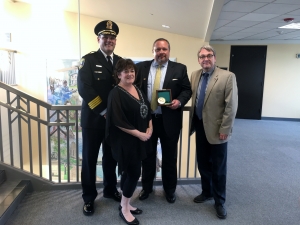 In 2016, Spurling, of St. Charles, went to the aid of Turyna, who was bloodied, distressed, and fleeing a man armed with a handgun.  The assailant repeatedly shot at Turyna as she fled, Spurling following while calling 911.  Spurling then lunged at and tackled the assailant, taking him to the ground, disarming him and holding him down until police arrived at the scene.

After receiving the medal, Spurling thanked the officers for their response that day and every day.

Ansolabehere, a volunteer presenter since 2016, received the Carnegie Medal in 2011 after pulling the pilot from a burning airplane that had crash-landed in Minnesota. Read more.