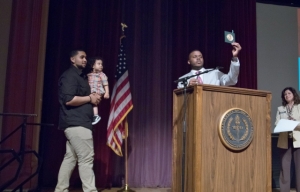 In August 2015, Sanchez responded to the scene of a burning vehicle, and, fully entering the car multiple times, worked to free a 4-month-old boy from his car seat’s restraints, eventually freeing him from the seat and removing him to safety.

In front of a crowd of about 400 people, Tubbs said Sanchez is an example of why he has so much faith in the community of Stockton.

Sanchez also received a key to the city of Stockton and several commendations from federal, state, and local officials. Read more.