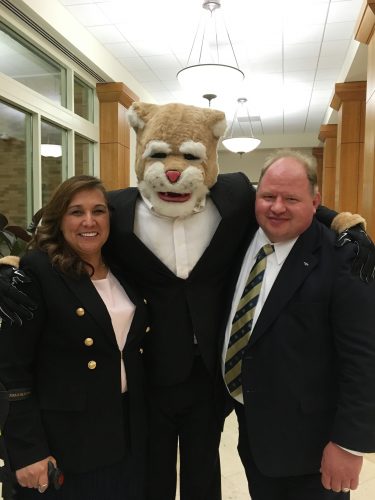 In 2007, Marc J. Ellison was awarded the Carnegie Medal for helping save a 3-year-old girl from falling in American Fork. While on a hike with her family, the girl had fallen from a steep wall and landed 75 feet below the trail. A family friend attempted to retrieve her, but he fell to his death.

Ellison, senior clerk and seasonal park ranger, descended to the girl using shrubs and trees as support, having to cover areas of fallen and loose rock with no holds available. Another man had descended to the girl over the same course, and he held her to keep her from falling off the ledge.

Ellison took the girl from the other man, who then used Ellison’s radio to communicate their status. They waited 90 minutes on the ledge until rescue workers and medic helicopter crews assembled and secured the girl. Ellison and the other man climbed to safety.

The girl was taken to the hospital, where she was detained overnight for treatment of lacerations and bruises. She recovered. Ellison sustained bruises to his legs, and he too recovered.

Ellison graduated with his master’s degree in public administration from the Romney Institute of Public Management. He achieved a 3.79 GPA and received numerous honors for his accomplishments as a student and for his service to the Boy Scouts of America.

Inspired by his youth in northern Virginia, Ellison has always considered himself a student of U.S. history.

“Growing up, my family vacations consisted of visiting national parks and historic sites. At 47 years old, I still have not been to Disneyland or Disney World, but I have visited most of the Revolutionary War and Civil War sites within a three to four hour drive from Washington, D.C.,” he said.

While reading about historical events in the U.S. and the actions of America’s Founding Fathers, he recalled visiting many of the same sites. Ellison’s lived experience motivated his decision to pursue a master’s degree in Public Administration.

“It is hard not to want to be like those men. I am grateful for their dedication, sacrifice, and nobleness of character,” he said.

The scholarship assistance Ellison received from the Carnegie Hero Fund allowed him to achieve his goal of working toward a better America and better tomorrow without the financial stress that accompanies higher education, he said.

“The Carnegie Hero Fund scholarship helped alleviate the fear that I would graduate so far in debt that I would not be able to out-earn the debt and interest I accumulated,” he said.

During his studies, Ellison achieved certifications in many areas. In February 2018 he was recognized by the American College of Surgeons Committee on Trauma for completing a bleeding control course. In April of that year, he finished the Emergency Management Institute’s introduction to CERT, reaffirming his dedication to serve in times of crisis through continued professional development and completion of the independent study course. Finally, in June, Ellison completed the Emergency Care & Safety Institute’s course on wilderness first aid.

Ellison was also awarded for his success inside the classroom and outstanding service in his community.

In September 2017, he received Utah National Parks Council’s highest recognition—the Silver Beaver Award. This honor was introduced in 1931 and is a council-level, service award granted by the Boy Scouts of America to registered Scouters for distinguished service to youth. Aside from his master’s degree, Ellison considers this honor his proudest accomplishment.

“For those of us that have spent thousands of volunteer hours in the cause of Scouting, it is as if you have ‘arrived,’” Ellison said.

Upon graduation, he received the Gloria Wheeler Good Works Award. As indicated in the ceremony program, this award is given each year to a graduating Master’s Degree of Public Administration student who exemplifies the characteristics of former faculty member, Gloria Wheeler, Ph.D. She was known as a competent and caring person, a friend of students, a loyal colleague, a champion of diversity, and a faithful person who served others generously and demonstrated a devotion to public service and management excellence in government.

When he began the three-year program in 2015, Ellison knew he wanted to take full advantage of the opportunity to develop relationships with the 45 students in his class. He worked hard and strived to add value to classroom discussions and group assignments.

“I knew that [my peers] were not average, but a group of intelligent, hardworking individuals that were adding value to their community. Each one of my fellow students had a story to tell, their story, and I received inspiration listening to each one of them,” he said.

While working toward his master’s, Ellison stayed busy. He worked full-time during the week, had a part-time job on the weekends with the National Park Service, gave tours of Timpanogos Caves, and still managed to organize a group of 30 young men to attend the 2019 World Scout Jamboree, a quadrennial event that brings together tens of thousands of members of the World Organization of the Scout Movement.

After graduation, Ellison was promoted to events services supervisor from his previous role as an administrative assistant with the Church of Jesus Christ of Latter-day Saints. He said he considers it another step in the right direction and is excited for the opportunities to come.