Boy Scouts organized a special ceremony to honor Carnegie Hero and Boy Scout John David McRae and the boy he attempted to rescue, Norman E. Vrba on the anniversary of the act, April 22, 2019, in Temple, Texas.

“Society values heroic qualities because they are uncommon. People are much more ready to look away because they are afraid. That’s why we should honor and celebrate those who are willing to jump into action,” stated Gary Smith, Scoutmaster of Temple Boy Scout Troop 101.

The Troop opened the ceremony with the Scouts, ages 11-18, leading the march to John’s gravesite in Hillcrest Cemetery. They presented the American flag and Troop 101 flag. Prayers were offered by Deacon Barney Rodriguez of St. Mary’s Catholic Church; where John and Norman served as altar boys together. 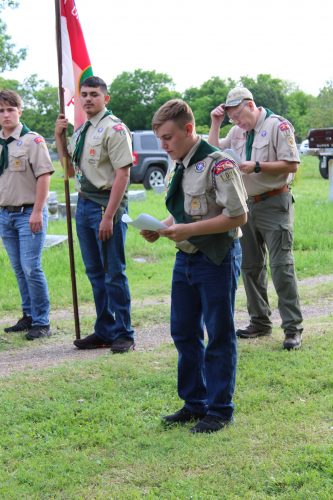 To honor and remember the extraordinary actions John performed, his story was shared and the official Carnegie Hero Fund citation was recited.

Seventy-three years ago, on April 22, 1946, sorrow loomed in Temple, Texas. John, a 13-year-old schoolboy died while attempting to save his fellow classmate 12-year-old Norman from drowning.

The day after Easter, John, Norman, and several other boys decided to spend their holiday break fishing at Pepper Creek. The banks were slippery and full of mud due to recent rain. Norman fell from the bank into a pool, where water was 8 feet deep.

John was a member of Boy Scout Troop 106, a troop no longer in existence, and had completed swimming and life-saving courses through scouting. He immediately jumped in, while still fully clothed, and swam 15 feet to Norman, who was desperately flailing.

When John reached him, a violent struggle ensued. Another boy dove from the opposite bank and swam to them, but he was unable to assist. He swam back to wadable water and then extended a fishing pole to John and Norman. John grasped the pole and was pulled toward the bank. Once he had almost reached the bank, he looked back and saw that Norman had submerged. He released his hold on the pole and swam back to Norman to pull him to the surface. The other boys extended the fishing pole to them once more, but neither took hold of it. In a brief second they both drowned.

During the ceremony, Scout Adam Dlugas, then 16, read the words taken from 2nd Corinthians 4:8-9 aloud. “We are afflicted in every way, but not crushed; perplexed, but not driven to despair; persecuted, but not forsaken; struck down, but not destroyed.”

“Scouting works to instill values that we see as heroic and worthy, and to develop men and women of good character. The McRae boy let go of his lifeline to save another,” said Smith.

In November 1946, John was named a Carnegie Hero. His father accepted the bronze medal for heroism during a service held in Pittsburgh.

The two boys were buried next to each other in Hillcrest Cemetery, just a few blocks from their parents’ homes. Years later, the McRae family moved to Las Cruces, N.M. There, Mrs. McRae decided to have her son exhumed from Hillcrest and buried next to his father. She said she was gratified to know that the family would finally be together in death, if not in life.

Each of the boys were represented at the Texas ceremony by family who traveled nearly five hours to join in recognizing the heroic efforts displayed that day 73 years ago. The families were given the opportunity to share a few words in honor of their loved ones.

Although Carnegie Hero Fund’s records show the McRae family received a medal, its whereabouts are unknown. To honor John during this ceremony, the Carnegie Hero Fund supplied a grave marker to adorn his gravesite.

“Having that [marker] there for the family really made the ceremony special,” shared Smith.

In addition, Troop 101 arranged for a memorial stone, donated by Terrell Granite, to be placed at the empty grave next to Norman.

The ceremony concluded with the playing of taps while the scouts retired the colors. A reception with light refreshments was held immediately after at the Lamar Middle School cafeteria for all guests to join in fellowship.

“We teach the scouts that you don’t have to know someone to honor them or respect what they did. When we quit remembering those individuals, they are lost to the ages,” said Smith.