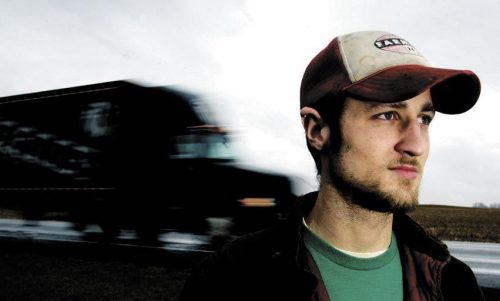 Inspired by advice from the woman he saved, Carnegie Hero David Michael McCartney, 35, of Darlington, Ind., became a hero once again this year by donating a kidney to a stranger.

McCartney met Elizabeth A. Testerman, then 54, when he and another man, Lee Pierce, removed her from her burning vehicle after a January 2006 highway accident in Atlanta, Ind. At the time of the rescue, Testerman referred to McCartney and Pierce as her “angel babies.”

Testerman told McCartney, then 21, to make certain that he always helped others. McCartney and Testerman, who lived in Texas, kept in touch by phone and through letters until her death from lung cancer three years later.

McCartney said he took Testerman’s words to heart, and in February 2019, McCartney donated one of his kidneys to an anonymous recipient.

Although he always knew he wanted to help people, the decision to become a living organ donor didn’t cross his mind until a friend of his wife, Kelly, lost a brother to renal failure after receiving two kidney transplants. The transplants allowed the man to live an additional 10 years before he passed away.

McCartney said he thought an organ donation sounded like a great way to help someone else, so he requested information on live kidney donations from Indiana University Health. He also talked to a woman he met at a charity golf outing who had donated a kidney. McCartney said he learned that live kidney donations had a higher success rate than those donated by a deceased donor.

After seven months of testing, including blood type compatibility and psychological testing, to see if he was eligible to donate, McCartney was given the go-ahead in December 2018. He said it all stemmed from Testerman’s words of wisdom.

McCartney said that none of his family members discouraged him from donating a kidney, “but one of them thought I was crazy.” McCartney said he did not think about the “what ifs” of donating, but about “what will be,” and realized recipients are looking for “a hope and a dream.”

McCartney, who was in good health and extremely active before the surgery, recovered from surgery quickly, returning to work in half the typical recovery time. He ran two half marathons four months after his transplant surgery. The half marathons both took place the same weekend, one in Indiana and the other one the next day in Ohio.

Carnegie Hero David Michael McCartney, left, with his son Elijah, after a half marathon May 4 in Indianapolis. McCartney ran two half marathons in one weekend four months after donating a kidney to a stranger.

He and his wife raise lambs, pigs, cows, and chickens at their home in Darlington, a rural town in Indiana. His full-time job is in the maintenance department at the City of Carmel. McCartney was given scholarship money from the Carnegie Hero Fund in 2009 to attend school to get his commercial truck driver’s license. He said he uses the skills he learned there at his maintenance job.

McCartney said he believes strongly in the Golden Rule: Do unto others as you would have them do unto you.

He said he didn’t donate his kidney to get a pat on the back. He emphasized that his email to the Commission about his kidney donation was simply to convey how being awarded had continued to affect him.

And what does McCartney think Testerman would say about his donation if she were still alive?

“First, she’d scold me for risking my life, then applaud me for a great sacrifice. She understood risk versus reward,” he said.

McCartney said he hopes to meet the recipient of his kidney one day, but it is up to them to decide if that will happen, and so far the recipient has not been in touch with him.