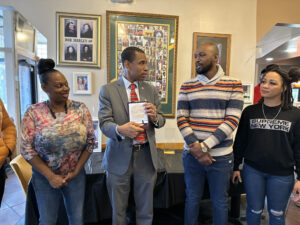 From left, Evangela Stanley, owner of People’s Choice Kitchen, Carnegie Hero Darnell J. Wilson, Rochester, New York, Mayor, Malik Evans, and Wilson’s girlfriend, Damaris Marshall, pose for a photograph during the presentation of the Carnegie Medal to Wilson. Evans presented the award to Wilson at a Nov. 1, 2022, ceremony after Wilson was awarded the Medal for intervening in an armed robbery of Stanley’s restaurant.

On Wilson’s actions, Evans said, “In a moment of crisis that could paralyze anyone with shock or fear, Darnell Wilson Jr.’s immediate instinct was to put his own life at risk to save the life of another.”

Wilson became somewhat of a local celebrity after dramatic video footage released by police showed him fending off a man armed with a pistol attempting to rob People’s Choice Kitchen in Rochester on December 23, 2019. Responding to restaurant owner Stanley’s screams, Wilson struggled with the man while the gun was discharged twice. Wilson threw the man through a plate-glass window, leaped after him, gained control of the weapon, and with the help of a fellow employee, punched and kicked the assailant until he fled the scene.

“Darnell Wilson and Evangela Stanley are both heroes in their own way and the city of Rochester is a better place with them in it,” said Evans.