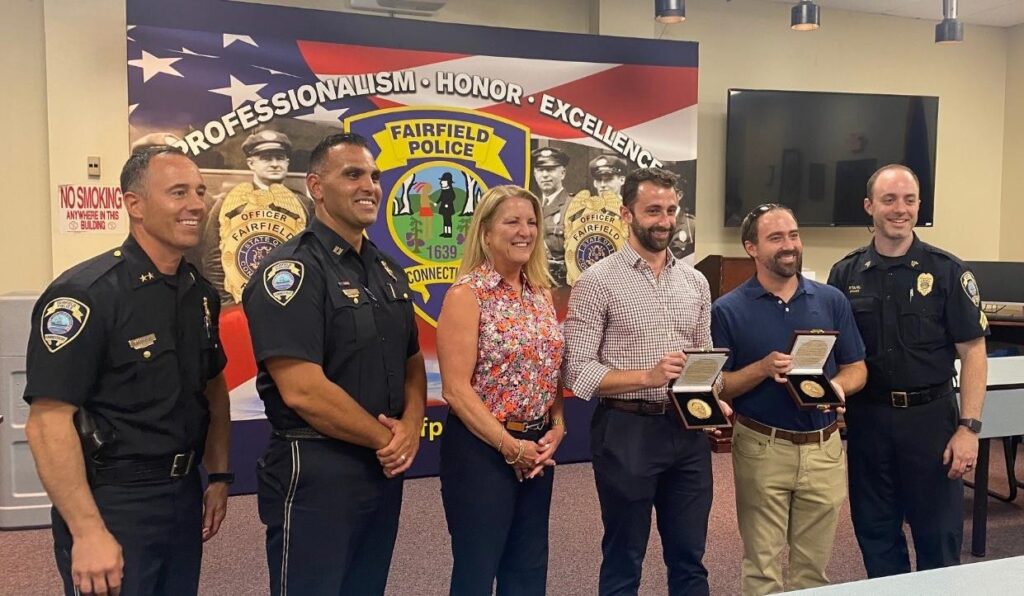 From left, Fairfield (Connecticut) Police Chief Robert Kalamaras and Captain Antonio Granata; First Selectwoman Brenda Kupchick; Carnegie heroes and brothers Jonathan and Matthew Goldfarb; and police Sgt. Michael Stahl pose for a photo after a July 7, 2021, ceremony in which Kupchick and Kalamaras presented the Carnegie Medal to the brothers for a rescue two years earlier. Jonathan is a resident of Fairfield.

The Goldfarbs entered the frigid December waters of Lake Mohegan near Fairfield in 2019 to save a 24-year-old man who had entered the lake to retrieve a dog that had broken through ice partially covering the lake. In open water about 100 feet from shore, the 24-year-old and the dog struggled in the water. Jonathan, then a 26-year-old physical therapist; and Matthew, a 30-year-old Howell, New Jersey, teacher, responded and ran to the scene. The Goldfarbs entered the water and moved ice out of their path as they swam to the man. Jonathan grasped the man, and Matthew grasped the dog, and they swam back to shore and exited the water. The men were treated at the hospital for hypothermia, lacerations, and contusions, but they recovered.

“The actions of both Jonathan and Matthew Goldfarb represent an outstanding act of heroism,” Kalamaras said at the ceremony. “The brave actions of these men, who risked their own lives, were most deserving of recognition.”

According to Kalamaras, it was Fairfield police officers who nominated the Goldfarbs for the Carnegie Medal.

“These heroes are very deserving of this high honor and have made our community very proud,” said Kupchick.