Conversation flows easy from 2005 Carnegie Hero Seth T. Stein, and humor comes even easier, which is probably why Stein’s first reaction to hearing that the person he saved 17 years ago wanted to connect with him was to crack a joke.

“Should I start the call asking what took her so long?” he asked when a Hero Fund staffer contacted him to find out if he was interested.

“I packed everything up in like 48 hours, and had gotten very little sleep,” she said.

Late on April 30, 2004, she left, her car packed to the gills, with her two children, 6-year-old Jatae Queen and 5-year-old Jamia Queen. About an hour out from her mother’s Virginia home, she fell asleep at the wheel in New Kent, Virginia.

Stein was driving nearby and witnessed the accident. He ran to the car, where Carnegie Hero Robert B. Gottschalk was unbuckling Anderson’s seat belt and pulling her from the car.

“I remember her screaming, ‘Save my kids,’” Stein said.

He opened a back door, unbuckled Jamia and removed her from the backseat. As flames spread to the interior, Stein returned to the backseat and, after attempting to pull Jatae, Stein realized his legs were pinned between the seat and the door.

Stein recalled asking Jatae if he knew of Superman, and, after Jatae nodded, told him on the count of three they both were going to pretend to be Superman, and Jatae was to push with all his might.

It worked, and Stein pulled Jatae into the backseat with him and then carried him from the car. Despite spreading and growing flames, Gottschalk had stayed with Anderson at the side of the car, and after securing the children, Stein returned to the car a third time to help Gottschalk drag Anderson to safety. Anderson had critical injuries from the accident, but she was not burned.

“I think (Anderson) gives me more credit than I’m due,” Stein said with an air of casualness.

“I mean, I’m glad I was able to do it, but it was literally like, right place, right time. This was just a thing I did 20 years ago,” he added.

But for Anderson the accident and rescue was a wake-up call, literally and figuratively.

“At that time in my life, I was full of doubts about the decisions I was making. I wasn’t sure if leaving my husband was the right choice. I wasn’t sure if I should turn the car around. I think I needed a hard knock to put a period on that chapter of my life and move forward,” Anderson said.

The accident and the risk that Stein and Gottschalk took to save Anderson, Jatae, and Jamia changed everything for Anderson — “my career path, my thought processes, even the way I live my life,” she said.

After recovering, she purchased a home, enrolled in nursing school and became a licensed practical nurse, and is working toward her bachelor’s degree in nursing. She underwent gastric bypass surgery and now prioritizes health and exercise, something she failed to do before the accident.

“I pray that you somehow understand how much your actions have left a positive imprint on my life and ultimately changed my life,” Anderson wrote in a text message to Stein after connecting.

Every April 30, on the anniversary of the accident, Anderson’s mother sends her a link to the Hero Fund’s account of the rescue. This April, Anderson noticed a new link on the Hero Fund’s website — “Request More Information on a Hero,” which sends users to a contact form.

“I had been trying to find them on and off for years,” Anderson said. “There’s not months, weeks, or days that go by where I don’t think about what these men did for me, and I wanted to make sure they were OK, and I wanted them to understand how much it meant to me that they saw a burning car in the middle of the woods and came to my aid. I didn’t want anything to happen to me or them without being able to say thank you.”

The Hero Fund then contacted Stein to make sure a reunion was something he wanted. Without any hesitation, Stein agreed and after a few days, Anderson called Stein.

“I was so nervous,” Anderson said. “How do you thank someone for saving your life? I don’t have a million dollars to try to repay him, not that it would be enough anyway.”

They spent an hour on the phone that night, updating each other on their lives and retelling the story of the accident and rescue from both their perspectives.

“I was just hoping that (the rescue) didn’t affect his life in a negative way and that doing something that big and kind-hearted and thankless and good meant everything to me,” Anderson said.

For Stein, the “genuine and sweet” connection has been meaningful as well, he said. 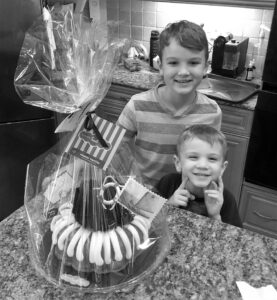 “Connecting with this family has made me realize that I truly made a difference in their lives. It’s humbling that she thinks I’m her ‘angel’ or whatever, but it does feel like the rescue, my actions have more purpose now,” he said.

Stein also connected with Jatae, who didn’t remember the accident, until Stein mentioned Superman, which cracked the easy-going exterior of Stein, now a father of two young boys.

Anderson said that since connecting with Stein, they’ve shared texts on birthdays and holidays.

Anderson even sent Stein a bundt cake with a plastic life preserver adorning the top with a card that read, “Thanks a bundt! You saved the day!”

The families plan to keep in touch.

Anderson said her next step is to try to connect with Gottschalk or his family.