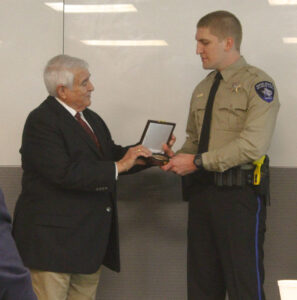 U.S. Rep. John Carter, left, presents Williamson County Sheriff’s Deputy Jonathan A. Hudash with the Carnegie Medal on June 9, 2021, at the Deputy A.W. Grimes Law Enforcement Training Center, while Williamson County Commander James David read Hudash’s rescue citation. More than a year earlier, Hudash responded to the scene of a twocar crash in Round Rock, Texas. Despite heavy smoke and flames issuing from inside the van, Hudash twice reached inside to release a 22-year-old man from his seat belt, and then pulled him from the burning car.

“To be honest during the incident, all I could think about is there is no way that I wasn’t going to get this man out of that car,’” Hudash said at the presentation. Carter represents Texas’ 31st district.