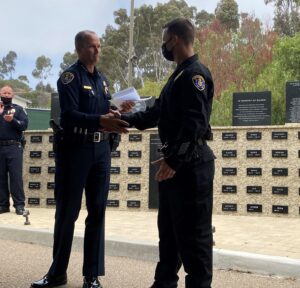 A year earlier San Diego Police K-9 officer Wiese used a dog leash to rappel down a 30-foot cliff and then entered the Pacific Ocean to save a man and his two daughters from drowning. Before sunrise, a truck containing the 47-year-old father and two 2-year-old girls left the road at the top of the cliff and entered the ocean. Other officers at the scene lowered Wiese to the base of the cliff, where he removed the leash and entered the water. Wiese swam to the man, who was larger than him, grasped him, and pushed him and the girls to the base of the cliff. One of the girls was unresponsive, and he secured her to a backpack; officers at the top of the cliff hoisted her, and then her sister, to safety; they were later hospitalized with serious injuries. The father was removed from the cliff by helicopter. Wiese eventually used a surfboard to paddle about 200 feet to a point where he could exit the ocean.

“The police officer and the father in me just kind of kicked in. You have seconds to come up with a plan, and you hope it works, and fortunately for me and the other officers that were there it worked that day, and we’re all here today because of it,” Wiese told Good Morning San Diego after the incident.