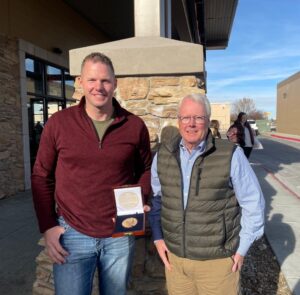 Bair and his family joined Scully for a lunch and private ceremony in recognition of Bair’s May 6, 2021 rescue in St. Anthony, Idaho, where Bair saved a man trapped inside a burning vehicle.

Bair, a former NFL player, made national headlines after he rescued the man, who’d been pinned inside the cab of his overturned semi-truck following a collision with an oncoming train. Bair, who’d stopped at the scene, rushed to the truck after hearing calls for help coming from inside the cab. Once there, he leaned into the truck through the rear windshield, which had shattered, and unbuckled the man’s seat belt as smoke poured from the vehicle. He grasped him under the arms while the man pushed against the steering wheel with his feet, ultimately pulling him from the truck, leading him to safety with the help of another bystander as flames engulfed the semi-truck.