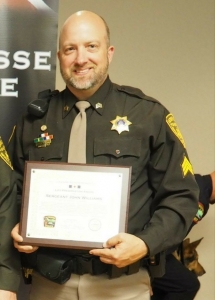 La Crosse County Sheriff’s Sgt. John P. Williams has once again been recognized for life-saving actions while on duty.

In May 2017, the La Crosse County (Wis.) Sheriff’s Office recognized Williams for two separate incidents in 2015.

The sheriff’s department presented its Lifesaving Award to Williams, of La Crosse, after he responded to a scene of a farmer stuck under an ATV.

“I couldn’t see him and only saw a huge ATV upside down. I cleared some grass and found his face at the front of the ATV. He looked dead and was purple,” Williams described the Washington, Wis., scene.

Williams lifted the ATV off of the farmer and held it long enough for a firefighter to arrive and pull the man to safety.

“It seemed like minutes. No injuries. It was quite the miracle. Next to swimming in the river for the Carnegie award this ranks right up there. Every second counted, and I just got lucky,” Williams said.

Williams also received a Life Preservation Award from the La Crosse Police Department for his role in saving the life of an overdose victim. He was aided by a La Crosse city police officer.

Williams is a 2012 Carnegie Medal recipient and continues to serve the Hero Fund by presenting the Carnegie Medal to recent awardees in the Wisconsin region.

In 2011, Williams earned his Carnegie Medal by entering the Mississippi River at night after a man who was carried downstream by a strong current.  Williams was carried about 400 feet downstream and was holding to a bridge pier, when he saw the man struggling to stay afloat.  Williams intercepted the man and held to him as they were carried farther downstream and submerged repeatedly.  Boaters were able to secure the men with a line and fire fighters arrived to take them to safety.