When six men, including three Americans, subdued an armed assailant aboard a Paris-bound train in August 2015, The Wall Street Journal concluded, “The six who saved the day perfectly represent modern heroism as it came to fore in the 20th century:  In a situation of extreme danger, they chose to expose themselves to additional risk, thereby saving the lives of others.”

The Commission has known all along that taking on risk—not merely additional risk, as stated above—is what makes a hero.  “Nowadays,” the article continues, “the word ‘heroism’ is often used as a synonym for everyday inspiring behavior, or steeliness despite suffering, or selfless generosity or any number of exemplary actions.  The actions of these six men, however, were the genuine, life-risking article.”

The “genuine article” is what engaged the Commission in 2015 as it has for the past 112 years, or since Andrew Carnegie’s charge:  Whenever heroism is displayed by man or woman in saving human life, the Fund applies.  Through the work of the Executive Committee, the Fund “applied” in the naming of 84 new awardees of the Carnegie Medal, as taken from the 829 acts of heroism reviewed by staff.  Benefits, in the form of scholarships and beneficiary payments, were provided in more than 100 other cases that were previously awarded.  In short, we have successfully concluded another year of fulfilling Mr. Carnegie’s mandate, and we have done so with decided commitment.

The year’s heroes represented a broad geographic range, with the 76 U.S. awardees coming from 28 states and the eight Canadians from four of that country’s provinces and territories.  States claiming the most heroes were New York (10), Florida (seven), and Oregon and California (five each), with Ontario claiming five and Manitoba, British Columbia, and Alberta one each.  At 9.5% of the total, the number of Canadians awarded in 2015 was slightly higher than the historical ratio of 7.7% (or 759 of 9,821 awardees over the life of the Fund).   Likewise, the year’s ratio of female awardees—12% of the total, or 10—was slightly higher than the historical ratio of 8.9%.

By age, seven of the heroes were under 20, with the youngest at 13:  Robert A. Pritchard, Jr., of Jacksonville, Fla., saved a six-year-old girl from a tragic mobile home fire that claimed the lives of four of her family members.  The oldest heroes were a pair of septuagenarians, each 72:  Clifford A. Wright of Sarasota, Fla., saved two people from drowning in a submerging sport utility vehicle, and Helen Goulet of Courtenay, B.C., saved her 89-year-old friend from a house fire.  Seven of the other awardees were also in their teens; 18 in their 20s; 21 in their 30s; 19 in their 40s; 10 in their 50s; and seven were in their 60s.

Extraordinary risk to life is present in all of the cases—it is the primary requirement for being awarded the medal—and in 12 of them, or 14.3% of the total (the historical ratio is 20.5%), the rescuer did not survive.  Posthumous recognition of the awardee appears to be welcome.  Peter Todd Radke died at 43, leaving four dependent children, while attempting to save a girl from drowning.  His widow wrote:  “I am blown away by Mr. Carnegie’s generosity throughout the years in taking care of heroes’ families.”  Wayne L. Hoffman died, also attempting to save a stranger from drowning.  His widow told a reporter that the Carnegie Medal sums up exactly the kind of man he was:  “He always knew right from wrong, and he always went for the right.”  Tou Hu Vang died at 21 attempting to save his nephew from drowning, and his parents were profuse with thanks for his recognition:  “Your encouragement and support has moved us and touched our hearts in a certain way that no word in mankind’s language can possibly describe.”

One of the awards was not readily classifiable, as it was given to three recipients, each a member of the same family.   Gary and Mary Olson of Jefferson, S.D., were en route to the movies with their daughter, Shelby, when they were stopped by a woman whose husband was threatening her with a pistol.  As they acted together in securing the woman’s safety, the Committee felt it appropriate to issue one medal to the family.  Most recently one medal was given to a couple from Ontario, Neil A. and Anna G. Swayze of Renfrew, who combined efforts to pull a man from his burning car in 1976.

The 31 water-related acts, including ice rescues, were the most numerous by category, as is generally the case.  Fire-related acts were next at 27, with 14 rescues from burning buildings made or attempted and 13 from burning vehicles.   Rescues from human assault numbered 11, followed by animal attack, seven; moving vehicle, four; submerging vehicle, two, and elevation and suffocation, one each.  The latter was unusual, involving a 20-year-old farmhand, Michael D. Bates, who helped to save his grandfather from suffocating in settling corn kernels in a grain bin.  A 275-pound polar bear and a 12-foot-long (estimated) tiger shark figured in the animal attacks, the former bested by 69-year-old William Ayotte of Churchill, Man., and the latter by Brian Wargo of Kailua-Kona, Hawaii.  “Its intent was to eat my friend right in front of me, and I wasn’t going to let that happen,” Mr. Wargo said.

Presentations of the medal were made in several cases, by Doug Chambers, director of external affairs, and those past awardees who have volunteered their services in a relatively new “awardee-to-awardee” initiative.  One such presenter is 2012 awardee John P. Williams, a sheriff’s deputy who has personally delivered six medals to heroes within a fair distance of his La Crosse, Wis., home.  Williams was a guest of the Hero Fund at the Committee’s December meeting so that his efforts could be formally acknowledged.  Chambers himself made presentations in Illinois, California, and Michigan.  Other outreach activities developed during the year included social media representation, with case investigator Julia Panian overseeing our Facebook page and late in the year starting a Twitter account to tweet Hero Fund news.  Adept at such things, she has largely taken over the website, and to it she has added a Tumblr application, on which is posted selected media mention of the Commission and its awardees in something like an electronic scrapbook. 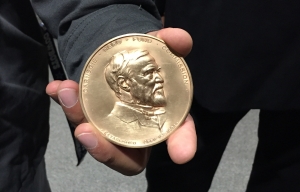 Committee oversight extends to the payment of monetary grants, or a) funds given to each new awardee, b) continuing monthly grants to beneficiaries, and c) scholarships.  The year saw an increase in the initial hero grant, to $6,000; actually, the grant was restored to that level, having been decreased in the wake of the recent recession.  Beneficiary grants, given to the dependents of 62 posthumous awardees, totaled $295,855 in 2015, and scholarship giving of $204,527 in 2015 went to 36 students.  Scholarships, available to pre-retirement awardees and the dependents of posthumous and disabled awardees, are given on the basis of need, and often in the acknowledgement is the sentiment that attaining the schooling would be impossible without the Commission’s assistance.  “I am really getting a great college experience and it is all due to the Carnegie Hero Fund.”—Michael Thanos, son of a posthumous awardee.

Efforts at joining the remaining nine of Carnegie’s original 11 hero funds into a cohesive unit—the Carnegie Hero Funds World Committee—progressed during the year, culminating with a meeting of representatives of eight of the funds in New York in October during the biennial presentation of the Carnegie Medal of Philanthropy.  Commission Chair Mark Laskow led the meeting, outlining broad goals to be taken to insure the continuity of the funds and their work.  Eight Executive Committee members attended the meeting, thus having the opportunity to get to know their overseas counterparts.  Legwork for the meeting was carried out earlier in the year by Laskow and Walter Rutkowski, who visited with the leaders of the funds in Norway and Denmark in May.  We hope to continue the overall momentum.

The Committee was strengthened by the addition of Evan S. Frazier of Highmark Health and Eric P. Zahren of the U.S. Secret Service, elected to the board in September; they present impressive credentials and have shown respect for the Commission’s work.  At staff level, a new case investigator, Chris Foreman, was hired.  Service anniversaries were marked during the year:  Myrna J. Braun joined the Hero Fund 60 years ago and was honored at the Annual Meeting in June for her loyalty and efficiency; Rutkowski completed 40 years; Jeffrey A. Dooley passed the 30-year mark, the last 25 as investigations manager; and Melissa A. McLaughlin completed 10 years as investigator.  Our staff is small (seven full time and three part time), but they reflect an admirable degree of dedication and expertise.  We salute them for their fine efforts.  I would also like to mention the Committee’s work and am proud of all we do.  I thank everyone for their respective roles and enthusiasm.