On May 1, 1962, the weather was overcast in Mason County, Wash. Will H. Simpson had just finished up work as a plywood machine operator around 4 p.m. It was his 50th birthday, and he had plans to celebrate at a nearby tavern off Highway 101.

Simpson hopped into his 1953 Dodge pickup truck and drove to the bar for libations and revelry. At 5 p.m., after having two drinks, he decided to head home. Simpson rolled down his driver window halfway and pulled onto the highway, heading south. Misjudging a turn, Simpson veered from the pavement and onto a berm bordering a swamp, 1,000 feet wide and containing dense flora, shrubs, and other vegetation. The water was dark, and its surface was covered with patches of green slime. On the bottom was a layer of muck, 1 foot deep.

The pickup, which had a camper shell bolted to the truck bed, landed upright in the swamp with an audible splash heard by the drivers of two cars that were traveling behind Simpson in the same lane.

Another passing motorist, Lasca Joy Grytness, was driving a sedan with six boys inside, including her son Darrell, 12, toward the town of Shelton. The Daily Olympian of Washington reported the boys were baseball teammates, and Grytness was driving them home from Lower Skokomish Elementary school. From 500 feet away, she witnessed the truck veer abruptly from the highway and enter the swamp water below.

On impact, Simpson’s window shattered, and Simpson was hurled against the steering wheel with a force that cracked four of his ribs and rendered him unconscious.

The occupants of other cars — four men and a woman — exited their cars and raced north to a point where they could see the truck, which was about 35 feet west of the east bank and about 100 feet north of the south edge of the swamp. As the pickup truck sank deeper into the swamp, sludge rose to an inch below the cab’s windows.

Grytness stopped her car where Simpson had driven off the road. She exited the vehicle and instructed the boys to stay put. Grytness raced to the other bystanders and urged the men to take action.

“I won’t enter the foul water for anything,” stated one man.

The other bystanders said they didn’t know how to swim.

As part of his investigation, Commission hero hunter Herb Eyman recorded details of Grytness’ swimming ability. He indicated that her skills were poor and that she had a longstanding fear of total immersion. She could float and tread water fairly well, but had no prior water rescue training or experience.

Fearing the unconscious driver was about to drown, Grytness cast her jacket aside. Keeping on her shoes, pedal-pusher trousers, cotton blouse, and glasses, she descended the steep gravel bank to the swamp. When she reached the edge of the slimy water she pushed off with her legs, assumed a swimming position, and entered the swamp. Grytness swam 35 feet westward to the side of the pickup truck, using a modified breast stroke and ensuring she kept her head above the slimy water in the 7-foot-deep water.

By now, the swamp water had risen to just above the sill of the driver’s door window. Fragments of broken, jagged glass surrounded the window frame.

“Come, you must get out of there!” Grytness implored of Simpson, resting her left hand on the roof to avoid being cut by the shattered window glass.

Simpson, still unconscious, did not respond. Treading water, Grytness reached below the surface of the discolored slime and, with one hand, grasped blindly for a door handle. When she located it, she attempted to open the door, unsuccessfully. Then, using both hands and bracing her feet against the side of the hood for leverage, she pulled hard and opened the door. Grytness held to the top of the door with her right hand and grasped Simpson’s coveralls with her left. The truck continued sinking and the water level had risen to Simpson’s chin.

“Come on!” Grytness pleaded as she tread water with one arm and maintained her grip on Simpson with the other.

“Everything is going to be alright,” he mumbled, oblivious to his present predicament.

Grytness pulled on Simpson’s shoulder, but found his chest wedged against the steering wheel. Meanwhile, Simpson struggled to sit up as the water rose to his mouth.

Only 10 inches of space remained between the water’s surface and top of the cab.

Grytness pulled hard on his coveralls and Simpson floated free from the seat and steering wheel through the open doorway of the cab as the truck continued steadily sinking.

By then, 20 onlookers had assembled at the bank of the swamp.

One man had a coil of rope. He hurled an end of it toward Simpson who was lapsing in and out of consciousness and therefore made no effort to grasp it.

Grytness refrained from reaching for the rope because she feared Simpson would submerge if she released her grip on his shoulder to lunge for it. Instead, she maintained her hold and swam on her side, using her right arm and legs to propel them toward the closest bank. At times, Simpson briefly revived and instinctually made swimming gestures, but he soon succumbed to unconsciousness again.

Grytness swam for 25 feet, hoping one of the countless bystanders would come to her aid, but no one dared enter the stagnant and slimy water. However, one man began descending the hillside toward the swamp so she swam in his direction. With tremendous effort, she swam 15 feet and reached the man, who was clinging to a utility pole near the swamp’s edge to maintain his balance on the steep bank. He grabbed Simpson, who remained limp and unconscious, by his coveralls, and pulled him part of the way onto the bank. Others helped to pull Simpson the rest of the way up to the berm. They covered him with a blanket as he regained partial consciousness. Free of Simpson’s weight, Grytness reached for the man’s extended hand. He and others assisted her onto level land.

By now, the pickup had fully submerged into the muck. 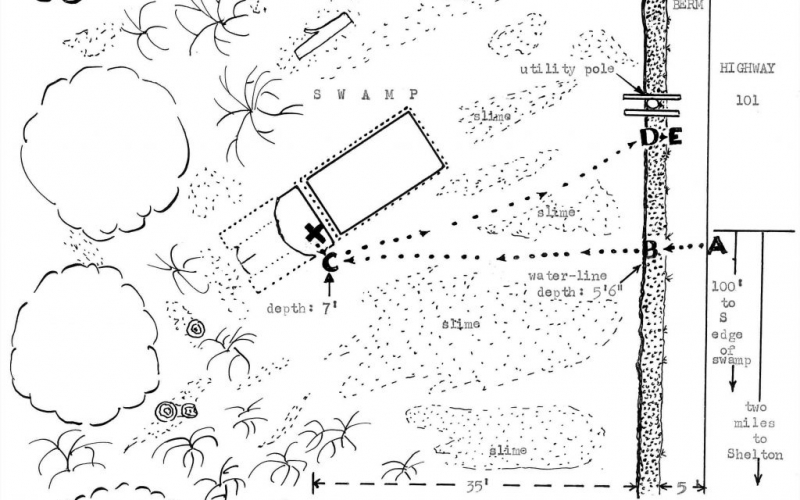 The original sketch by Case Investigator H.W. Eyman that accompanied the 1963 case report of Lasca Joy Grytness’ rescue of a man, at X, who was drowning after his truck entered a swamp. According to Eyman’s key, Grytness’ course followed ABCDE; she opened the driver’s door at C, from which she also worked the driver free from under the steering wheel; D indicates where she was assisted by others.

Grytness insisted the bystanders call an ambulance because Simpson was in need of immediate medical attention. A motorist left the scene and headed toward Shelton to report the accident and summon help. Grytness saw that Simpson was being adequately cared for by the witnesses of her bravery. Covered in slime from the neck down, she got in her car and drove home to take a hot shower and change into dry clothing.

Simpson was taken by ambulance to a hospital in Shelton. According to the Hero Fund’s account, he fractured four ribs in the accident and was diagnosed with a respiratory infection from the foul water he had inhaled. He was hospitalized for nine days and rested at home for five more before returning to work. He recovered completely and suffered no lasting effects.

Investigator Eyman established the case for Grytness’ award by traveling to Mason County, where he completed an assessment of the scene, including taking measurements, consulted eyewitnesses, examined the Washington State Patrol’s report as well as other accounts of the rescue, and questioned Grytness and Simpson.

One of the people Eyman interviewed was James R. Doran, a garage operator who removed Simpson’s pickup truck from the swamp.

Doran offered additional insight to the unpleasant nature of the scene, telling Eyman that he had attempted to hire divers to help remove the truck from the swamp, but they refused upon viewing the scene.

Doran himself didn’t dare enter the contaminated water either. Instead he undertook what he termed a “fishing mission,” by which he hurled the chain needed to retrieve the truck from the safety of the bank until eventually it caught the tail-gate of the cargo bed and he was able to pull the truck from the swamp.

Only when looking back did she consider the life-risk involved in saving Simpson. Her limited swimming ability and clothing hindered her mobility in the ominous swamp water. She also considered the possibility of having swallowed the contaminated water and the potential for it to have made her sick. Although Simpson was mostly unconscious, there was a possibility he could’ve panicked or struggled with Grytness during his lapses into consciousness, causing her to drown.

Undoubtedly, Grytness had taken a significant risk acting with Simpson’s well-being in mind.

Grytness, who went by her middle name, Joy, was awarded the bronze Carnegie Medal and $500. She was married to Mr. C. Dale Grytness, an accountant, and the couple had two sons and a daughter.

Grytness had previously attended school to become a teacher, but still needed a year and a half of credits to finish. She intended to use the award money to enroll part-time at a local college in Tacoma, Wash., and complete her degree. It was also noted by Eyman that the family was actively involved in the Shelton community in civic, church, and social circles.

The Governor of Washington at the time, Albert Rosellini, also issued her a letter of commendation in honor of Grytness’ heroism.