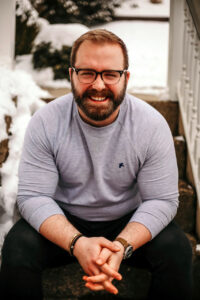 For as long as I can remember, I’ve been obsessed with larger-than-life tales of heroism and adventure. I read The Iliad and The Odyssey as a teenager and dreamt of the crystal-clear water and white sand beaches of the Aegean, replaying battles of note in my young, burgeoning mind. Into adulthood, I’ve retained that fascination with heroes and the stories that unite us around our common understanding of selflessness and altruism.

I majored in creative and professional writing at the University of Pittsburgh at Greensburg. While there, I continued to unearth stories of heroism in novels and magazines and newspapers. As I grew older, my love for larger-than-life characters faded. In its place, a new love for the characters that were as normal as you or me took its place, bringing with it an appreciation for those people who, when faced with an obstacle, rise to meet and overcome it. It is those stories that consume my imagination today.

When I applied for the open communications assistant job, I did not know about the Carnegie Hero Fund Commission. I investigated its website, perused the Deed of Trust, read hero cases, and dived deeper into the legacy Andrew Carnegie left behind. I discovered an organization with rigorous standards and a devotion to the facts and figures of every case. I found a rich, storied history that spoke for itself. The Hero Fund has lasted for more than a hundred years. It has tirelessly considered tens of thousands of cases and awarded more than 10,000 medals. When I came across that iconic first sentence in the Deed of Trust: “Gentlemen, we live in a heroic age,” I felt an intense feeling of recognition – of resonance – that this was where I was supposed to be.

Stories like John Hooley, a resident of my hometown of Jeannette, Pennsylvania, who saved two children and attempted to save a third from drowning in a pond near Delmont, Pennsylvania.

Hooley, a member of the church where I was baptized, discovered a group of children struggling to read water nearly 25 feet from the pond’s edge and reacted instantly, removing his shoes and shirt and wading into the pond. After successfully reaching the three kids, Hooley obtained a grip on 14-year-old Samuel F. Stephenson, to whom 8-year-old Robert J. Toomer clung, as a third unidentified boy hung onto Hooley’s trousers. He swam the three children 10 feet toward safety before being repeatedly dragged under the water. Near exhaustion and short of breath, Hooley was dragged to the bottom of the pond by the weight of Samuel. Soon after, the boy released Hooley, but Hooley struggled to find his footing after the muddy floor of the pond enveloped his feet. Hooley released Samuel in an effort to free himself and after clawing his way off the pond’s floor, he resurfaced and grabbed Robert and the unnamed boy and swam them to safety in shallower water where they were attended to by others who had arrived at the scene. Hooley didn’t know those children, but he acted anyway. As the children were crying out for help, he knew that others would arrive soon to help, and in that moment he made the choice to dive into the pond, fearing the kids would drown before help arrived.

My definition of heroism has evolved in my short time here at the Hero Fund. I have read case after case of ordinary men and women who bravely charged toward the sounds of danger, often without a second thought, knowing full well that they too could find themselves in harm’s way. Reading stories of these kinds showed me that the better angels of our nature, more often than you would imagine, reign supreme.

I have learned that communities are bonded together by their heroes. While national heroes can, and do, unite entire countries, it is the common man, that most unlikely of heroes, that serves as the glue necessary to adhere small communities together. I grew up down the road from where Hooley saved those children but no mention of him was ever made to me. Looking back now, I take great pride in knowing that the Hero Fund picked up the case and exhaustively investigated Hooley’s rescue before awarding him the Carnegie Medal. I’m honored to be working alongside my fellow Commission employees, sorting through hundreds of nominations so that civilians like John Hooley are recognized for their courage and selflessness in the face of imminent danger.

Those individuals willing to risk life and limb for their fellow man should be recognized, celebrated, and supported. That was Andrew Carnegie’s intention when he founded the Hero Fund and to be a part of that tradition of excellence as a storyteller is a privilege unlike any other.