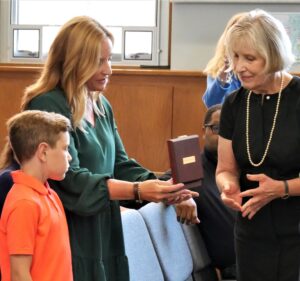 Maura Rosengren, left, accepts the Carnegie Medal posthumously awarded to her husband, Peter Rosengren, from Corinne Pierog, chairperson of the Kane County, Illinois, Board on July 12, 2022, at a ceremony held at the Kane County government center in Geneva, Illinois.

On March 28, 2021, Rosengren, of Batavia, Illinois, died after helping to rescue a 9-year-old boy from drowning in the Gulf of Mexico near Miramar Beach, Florida. After the boy was carried away from shore and into deeper water, Rosengren, a 42-year-old newspaper executive who was in the boy’s party, left the beach and swam to him. Although Rosengren reached the boy, he was unable to tow him to safety before they separated. Others brought the boy and then Rosengren, who was unresponsive, back to the beach. While the boy was treated at a hospital, attempts to revive Rosengren were unsuccessful, as he had drowned.

Batavia Mayor Jeff Schielke and Scott Stone, president and chief operating officer of the Daily Herald, where Rosengren worked, joined Kane County officials in recognizing Rosengren. “Pete loved life, and he was bigger than life,” Stone said, according to the newspaper. “He was a great man, and he’d be honored by what you’re doing here today.”