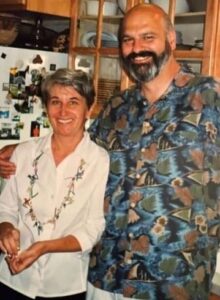 Ernest Lee Krueger, 72, of Spokane, Washington, died Wednesday, Sept. 22, 2021, after a tough battle with stomach cancer, with his beloved dog Piper by his side.

Krueger was born in Gordon, Nebraska, on Aug. 12, 1949. During adolescence he lived in Oregon, California, Wisconsin, and Washington. He attended high school in Yakima, Washington, and went on to join the Navy.

Krueger was stationed on the USS Independence and was a skilled helicopter rescue swimmer. During his years in the Navy, Krueger also enjoyed traveling to Europe. After serving, he graduated from the University of Wisconsin with a degree in landscape architecture. Krueger’s family still flies the Badger flag on Wisconsin game days.

In 1985, Krueger, 36, and his brother Nicholas P. Provost, 38, were traveling in Leavenworth, Washington, when they came upon the scene of a fatal accident involving two cars. Flames spread over both vehicles while a 2-year-old girl remained fastened in her car seat inside one of the cars.

Amid intense flames, the brothers pulled the vehicles away from each other. Then, Provost threw a rock through the passenger window of the car containing the toddler, which allowed them to unlock and open the passenger door. Flames entered the car as Krueger used a pocket knife to cut the toddler out of her car seat. The men pulled the girl from the car moments before its fuel tank exploded.

In addition to being awarded the Carnegie Medal, Krueger was also honored with the Washington State Patrol merit award for the heroism he demonstrated.

Krueger owned Coyote Construction, which maintained grounds and parks of Grand Coulee, Washington, and other areas. He finished his career as a financial advisor at Wells Fargo and retired in December 2020.

Krueger’s family described “Ernie” as a vibrant person who enhanced the lives of those lucky to have met him. He was a loyal, respectful friend, free of judgement, who was always entertaining others with jokes and stories.

Krueger was also enrolled as a tribal member of Oglala Sioux.

He found enjoyment in a variety of activities including basketball, scuba diving, sailing, mountain climbing, hunting, fishing, biking, and running. He was a passionate, self-taught chef who had a talent for pairing wines with his gourmet meals and desserts.

Later in his life, Krueger traveled to Japan, Canada, Tonga, the Caribbean, and Puerto Rico. One of Krueger’s and his partner of 35 years, Kay Sneva’s favorite travel activities was sailing in the San Juan with their friends.

Kay and her two children, TJ and Shelby, enriched Krueger’s life tremendously. Their shared family was a source of strength for all of them.

Krueger is survived by his partner, Kay; her children TJ and Shelby; three granddaughters; three brothers; two sisters; and many nieces, nephews, and cousins.