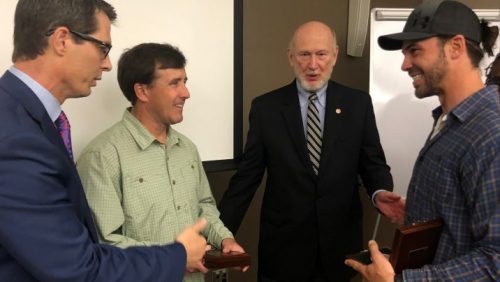 With a 20-foot waterfall downstream, two women, Arnetta D. Johnson, 55, and Raecyne Bechtold, 45, tenuously held on to their overturned raft amid the cold, fast current of the Youghiogheny River in Ohiopyle, Pa., while onlookers called for help on June 26, 2017. Whitewater rafting business executive director McCarty, 29, and whitewater rafting business operator Martin, 47, quickly launched single-person kayaks without standard safety gear. Martin arrived at the pier where Johnson was able grasp onto his kayak; allowing the raft to float free with Bechtold. McCarty paddled ahead of the raft and used his kayak to alter the raft’s course and speed, and guide it to the bank, where Bechtold reached safety. Meanwhile, Martin and Johnson were stuck on an exposed rock ledge. McCarty paddled there and secured Johnson with a rope. The three of them then waded toward the bank, where others helped remove Johnson from the water.

It was standing room only in a presentation room of the Ohiopyle State Park visitor center, jam-packed with community members who wanted to laud Martin and McCarty’s actions.

“You saved our lives. You are beyond being a hero,” Bechtold told McCarty and Martin. “It is an extreme honor to be here before both of you today and to speak and to tell the world what wonderful, wonderful men you are.”