In the early morning of an overcast Nov. 9, 1965, B. Bedelia Faeder, 73, was asleep in her third-floor apartment on King Street in Brockville, Ontario. The stone and brick building housed furniture, sewing machine, and sportswear stores on the ground floor, in addition to the entrance to apartments that occupied the second and third floors.

Faeder lived alone and suffered from a cardiac condition and arthritis, which caused her to move slowly. She was also extremely hard of hearing. Her neighbors and friends were aware of these infirmities, including 16-year-old Brenda Beth Fagan, who lived with her parents and two sisters one block from Faeder.

It was a chilly 28 degrees when fire broke out in the furniture store at 6:50 am.

A patrolman who was directing traffic nearby noticed the fire and immediately notified local fire and police. He entered the doorway leading up to the apartments and shouted to a man on the stairs to notify other tenants of the fire. Two minutes later, the fire truck and police arrived, and a constable ran to the apartment stairway to make sure the occupants had been alerted.

From the Fagan family home, Brenda’s parents saw the fire and commotion of responders. Her mother, aware of Faeder’s health problems and impaired hearing, telephoned her to wake her. She urgently explained to the woman that she needed to leave the building, but Faeder did not understand.

Hanging up the phone, Fagan encouraged her daughter to go to Faeder’s apartment. Although she had no rescue training or experience, Brenda ran 120 feet southeast to the apartment entrance, where, she later told Hero Fund Investigator James R. McCarron, she saw smoke coming from the furniture store.

As firemen worked to attach a hose to the hydrant, she entered the building. Light smoke permeated the hallway. As she ascended the stairs to the second floor, she encountered one woman fleeing the building.

When she reached the hall leading to the third-floor stairway, smoke became heavy and her visibility was virtually nonexistent. Probing for the banister leading to her elderly neighbor’s apartment, Brenda felt her way to the door, coughing and choking in the dense smoke. Her eyes watered, and she was unable to stop coughing.

During the Hero Fund’s investigation, Brenda told McCarron that she felt faint from inhaling the smoke.

“Dress quickly!” Brenda shouted as she hastily led the woman to her bedroom before opening a living room window for fresh air.

Meanwhile, a constable checked the second-floor apartments, and, after encountering dense smoke in the hallway leading to Faeder’s apartment and others, he retreated and advised a fireman with a gas mask to check on the third floor. Concluding that exiting out the front was too dangerous, that fireman ultimately aided two other women from the rear of their third-floor apartments to a roof of a one-story addition.

Smoke was increasing in Faeder’s apartment. From the window, Brenda saw her mother on the street below yelling to her to hurry. Brenda ran to the bedroom where Faeder had donned a dress and slippers. Suddenly, the apartment building rocked and the store windows were blown out, propelling three firemen into the middle of the street and shaking the walls of Faeder’s apartment, leaving both women stunned.

In the report to the Hero Fund Commission, McCarron concluded that mounting pressure built up inside the furniture store caused the explosion.

Gathering her strength, Brenda ran back to the living-room window and called to her mother, who shouted to Brenda to leave Faeder’s apartment through the rear door, where an enclosed porch accessed steps that descended to the flat roof of the one-story addition where a fire escape led to the ground.

From the ground, Brenda’s mother reported that flames issued along the west end of the building, and from inside Faeder’s bedroom, Brenda said black smoke was issuing from the baseboards. Brenda grasped Faeder’s arm and guided her 25 feet through the living room and toward the kitchen, urging the woman, who was upset, to hurry. She picked up a coat and put it around Faeder. Both women were coughing and visibility was lessening by the minute. Brenda felt her way around a kitchen table, pulling Faeder after her to the back door.

With difficulty, Brenda released the lock and pulled the woman onto the porch. She directed Faeder to the exit door. Smoke in the enclosed porch was so thick that neither woman could see the other. Brenda called to Faeder, who moved and found the young woman and held to her. The exit door was closed with a lock and latch. Brenda found the lock and released it, but the door would not open. Feeling along the door, she located the latch and opened it.

Both women were coughing and choking severely. Brenda unlocked the screen door and quickly helped Faeder outside onto the steps —
both breathed in the fresh air.

Flames burned on the west side of the roof, about 50 feet from them.

Brenda assisted Faeder down the steps. Then, a loud rumble bellowed through the building, a result of an interior wall in the furniture store collapsing.

Two women from the other third-floor apartment stood at the south end of the roof and began moving down the fire escape.

Brenda noted their efforts and tried to hurry Faeder along. During McCarron’s questioning, Brenda said she feared the fire might break through near them or the roof might collapse before she and Faeder could reach safety.

The women reached the narrow fire escape. Descending the ladder first, Brenda started down the fire escape, supporting her neighbor from behind. They were still coughing when they reached the ground.

Following the explosion, firefighters reported the fire was out of control. Within 20 minutes, the entire top of the building was engulfed in flames.

Four other fire departments were summoned to the scene and the fire persisted for nearly nine hours. The building and the one east of it were completely destroyed. Other buildings nearby were also damaged.

Neither Brenda nor Faeder suffered lasting effects. However, Brenda told the Commission investigator that she had a sore throat and inflamed eyes for two days and could taste smoke for a week. In addition, Faeder’s eyes were irritated, and she said she experienced persistent coughing fits for three days.

Brenda was awarded the bronze Carnegie medal and $500 for educational expenses. At the time of the investigation, she had completed the tenth grade and had plans to leave school to pursue secretarial training. 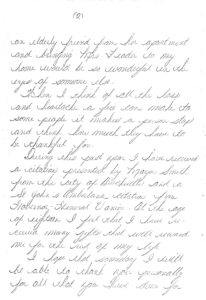 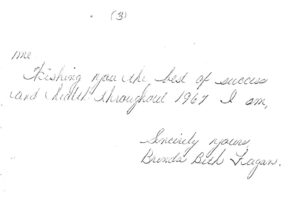 Handwritten letter from Carnegie Hero Brenda Beth Fagan to the Hero Fund in which she expressed her gratitude for the Carnegie Medal and financial award. In the letter, Brenda wrote, “It certainly has been rewarding for me this year to think that something as small as taking an elderly friend from her apartment and bring Mrs. Faeder to my home would be so wonderful in the eyes of someone else… During this past year I have received a citation presented by Mayor Smith from the city of Brockville and a St. John’s Ambulance citation from Governor-General Vanier. At the age of eighteen, I find that I have received many gifts that will reward me for the rest of my life.”