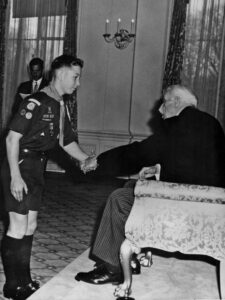 Grant was awarded the Carnegie Medal in 1965 for saving a 2-year-old girl from being killed by train in Whitefish, Ontario.

He ran over uneven ground, jumped a fence, and ascended the railroad embankment, reaching the track when the train was 100 feet away.

Ronald lifted the girl from the track, threw himself backward out of the path of the train, and rolled down the embankment with the child as the train passed without stopping.

His act of heroism was also recognized by the Boy Scouts of Canada, who awarded Ronald with a Gilt Cross and Bar Medal. This experience paved the way for Grant’s interest in community, family, and a commitment to a strong work ethic of honor and loyalty, according to his widow, Dianne.

He was committed to his family, his friends, his work and his community. He is survived by his wife, two children, and four grandchildren.