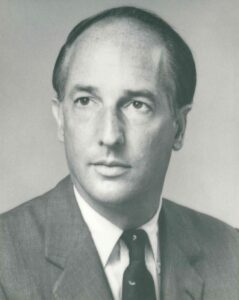 Walton served on the board of the Carnegie Hero Fund Commission from 1968 to 2012, and as an honorary member from 2012 until his death. Mark Laskow, Board chairman, reflected on Walton’s time at the Hero Fund:

“Jim Walton was a giant in Pittsburgh’s civic and business life. More importantly, he was a warm, wonderful, and witty man. The Carnegie Hero Fund was truly graced to have Jim as a member of the Hero Fund Commission for 44 years and bring all of those attributes into our deliberations.”

Walton was born Dec. 18, 1930, to Rachel Mellon and John Fawcett Walton, Jr., in Pittsburgh. He attended Shadyside Academy and St. Paul’s School before continuing his education at Yale where he earned a Bachelor of Arts in English literature.

Walton enlisted in the Army and achieved the rank of First Lieutenant, serving in Fort Sill, Oklahoma, and Frankfurt, Germany. Back stateside, Walton graduated from Harvard Business School with a master’s degree in business administration.

Walton began his professional career with Gulf Oil Corporation, which was founded by his maternal grandfather William Larimer Mellon. In this industry, Walton and his family traveled extensively, spending time posted in Philadelphia, Houston, Tokyo, and Rome. Walton was also elected to Gulf’s Board of Directors.

Family and faith were priorities for the Waltons. Wherever the family moved, they were involved with the local Episcopal Church. Walton raised money and offered guidance to parishes and ministers in the U.S. and abroad. In 1966, Walton, senior warden of St. Paul’s Church in Rome, was asked to be present in the Sistine Chapel for the first ever meeting between the Pope and the Archbishop of Canterbury.

In 1968, Walton was appointed as the President of the Carnegie Museums and Carnegie Libraries of Pittsburgh. He held this position for 16 years. Highlights from his tenure include organizational expansion, an addition to the Museum of Art, and enhanced financial security and community for future generations.

Walton’s sincere interest in people and new ideas was reflected in the personal relationships he formed with museum employees. When Walton retired, he remained a life trustee and was elected president emeritus.

Walton’s legacy continued after his working years. He served as trustee and chairman of the Vira Heinz Endowment and then vice chairman and vice chairman emeritus of the Heinz Endowments. In addition, he was a trustee of Carnegie Mellon University, the Allegheny Foundation, Penn’s Southwest Association, World Affairs Council of Pittsburgh, UPMC, Make a Wish Foundation, Extra Mile Foundation, the Cultural District Development Committee, and others. Carnegie Mellon University and Allegheny College recognized Walton’s contributions to the city of Pittsburgh by awarding him honorary doctorate degrees.

His family described Walton as one of Pittsburgh’s great men who did his work with ready wit and good humor – a man who served with compassion, and was always welcoming and respectful. Walton was a corporate executive, philanthropic leader, and volunteer in his beloved Pittsburgh.

In later life, Walton moved to Florida where he continued to give and be involved in community with the Stephen’s Ministry at St. Paul’s Church, their after-school program, Paul’s Place, and as a volunteer at Bethesda Hospital.

Summering in Ontario, Canada, with family and friends was a constant in Walton’s life. During his time there, Walton was a board member of the Beaumaris Yacht Club and president of the Beaumaris Fishing Club. He also co-founded the Pittsburgh Muskoka Foundation which provided a way for summer visitors to support year-round residents.

Walton valued time with his children, their spouses, and his grandchildren, often voicing how proud he was of all of them. His family remembers his humor, love of laughter, intelligent heart and mind, as well as his propensity to shed tears easily – especially for dear friends he hadn’t seen in a while.