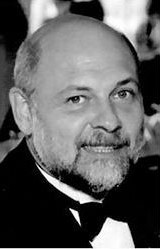 Nearly 30 years earlier, Lamberty was awarded the Carnegie Medal for helping save two individuals from a man who caused a multi-vehicle accident and then attacked them with a machete on June 3, 1991, in Racine.

A high school teacher, Lamberty, 41, lived nearby and went to the scene of the accident. He picked up a branch and, confronting the assailant, maneuvered to a point between him and one of his downed victims as the assailant swung the machete at Lamberty. When the assailant’s attention was distracted by others, Lamberty tackled him. Others helped to subdue the assailant until police arrived. Lamberty was treated for lacerations and abrasions, from which he recovered.

Born on Nov. 29, 1949, in Racine, Lamberty was the second son of the late Francis and Helen Lamberty.

In 1967, Lamberty graduated from Washington Park High School. He enlisted in the U.S. Army, serving with the 5th Special Forces Group. After two tours in Vietnam, he returned to the U.S. as a member of the Army Reserves.

After graduating from Carthage College with a degree in Physical Education in 1986, Lamberty was employed by the Racine Unified School District teaching P.E. and health at the Brown Alternative Center, McKinley Middle School, and Dr. Jones Elementary School. He retired in 2012.

His family remembers him as a loyal, honorable, generous, and respected man who deeply valued his Catholic faith and family. He especially enjoyed being what he called a “3-D”—a devoted, doting dad.

He is survived by his daughters, Courtney Lamberty Heide and Megan (Igor) Lisica, as well as his five beloved grandchildren, his “bubba,” Christian, who helped care for him in his final days; Autumn, Noah, Rio, and Niko.