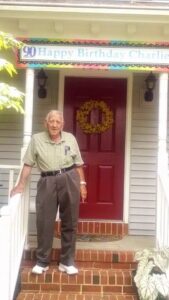 In 1998 Britt was awarded the Carnegie Medal for saving a 5-year-old neighbor boy from burning in a first-floor bedroom of his family’s house on Nov. 3, 1997, in Norfolk. After fire broke out in the family’s attached garage at night, the boy’s mother alerted Britt, 73, retired fire captain that her child remained in the house. Britt ran to the burning house and stepped into the living room, where dense smoke precluded visibility. As the boy’s father maintained voice contact with his son, Britt, crouching, made his way to the bedroom. He found the child and grasped him, then retraced his path to the front door as flames were breaking into the house from the garage. Three other people in the house died in the fire.

Britt was born on May 10, 1924 in Salisbury, North Carolina to Ruby and Charles Britt. He was raised during the Depression by his grandmother.

Near the end of his senior year in high school, he volunteered for the World War II draft and was inducted into the U.S. Navy on May 28, 1943, where he was involved in supplying troops during fierce Pacific battles of the war, including Iwo Jima, Tarawa, Kwajalein, and Saipan.
Britt started his lengthy career with Norfolk Fire Department on Sept. 12, 1949. When he retired, he was just shy of 38 years of service.

Britt devoted his adult life to his family and the fire service. He was a respected firefighter and fire officer, known to be knowledgeable, a good leader, and fun-loving instigator, according to his obituary.
After Britt was awarded the Carnegie Medal, Norfolk Fire-Rescue created the Captain Charlie Britt Life Saving Award. This is the highest award granted by Norfolk Fire-Rescue.

He was preceded in death by his wife Marian and his grandson, Chris.