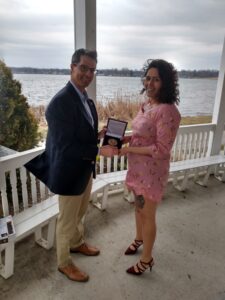 Carnegie Hero Fund Commission President Eric Zahren, left, presents the Carnegie Medal to Leslie E. Shaffer at a park gazebo in Akron, Ohio, on March 11, 2021. After a private lunch with Shaffer, her oldest daughter, her partner, and Hero Fund Case Investigator Joe Mandak, she received the medal for being one of three bystanders to rush to the aid of a woman being shot on an Akron street on June 16, 2019. The woman was shot twice, but Shaffer, risking gunfire, helped the victim and the youngest of her three children into Shaffer’s car to escape.